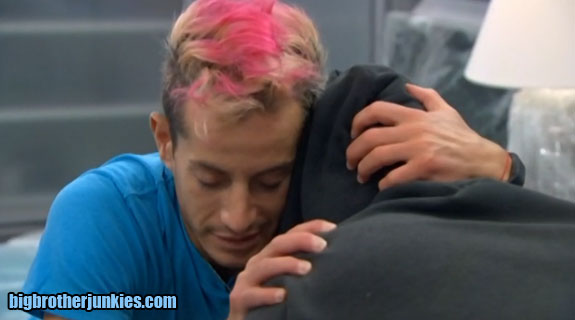 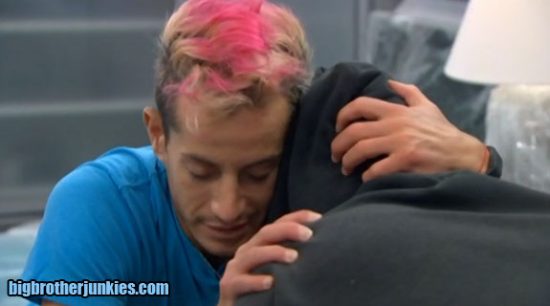 I’m not going to lie, these blog posts are getting tougher and tougher to write. Blogging about Big Brother is always super exciting when I get to recap the events of some brilliant plot to get someone out, or insane bed flipping drama. This season, however, has been different. Not only has the game been extremely stale with predictable evictions, predictable bob results and veto challenges that didn’t even remotely have the momentum changing feel to them. On top of that, we have had now two very emotional moments where players lost their grandfather.

Frankie lost his grandfather a few days ago, and had a very difficult time dealing with it. The houseguests rallied around him, and Derrick threw the HoH competition so Frankie could see photos of his grandfather (had Derrick won, he also would have avoided being a havenot for the week). Last night, the feeds cut again and returned to Derrick sitting alone dealing with the news he was just given.

His grandfather also passed away.

This is without a doubt the strangest week I have ever covered while writing for the show. It put many things into perspective for the players just exactly what they’re missing and what they’re playing for. Why they signed up to spend the summer away from friends and family, cut off from (almost all) news. It certainly wasn’t so they can lay around getting the best suntan they’ve ever had. It wasn’t so they can hone their skills at billiards. It was to compete against other people who made the same sacrifices in order for the chance at winning $500,000.

With that said, the power of veto competition will be held today. There is still plenty of talk of backdooring either Amber or Caleb depending on the outcome of the challenge. If that happens, the excitement level of the house could finally increase, but that won’t happen until the PoV meeting on Monday.   I am heading out to enjoy the afternoon. When I return, and when veto competition results are in, I will give you all an update.  Have a good afternoon!  And make sure to give your family members an extra hug today.