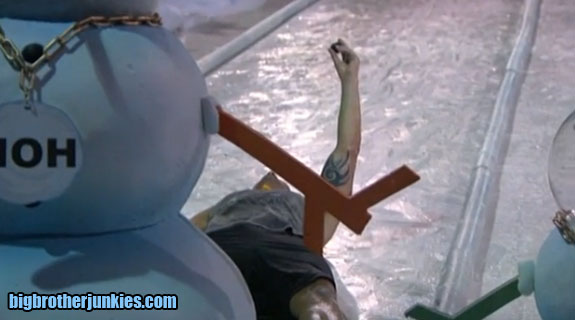 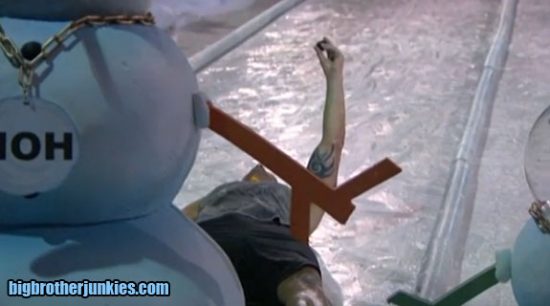 After a long and grueling competition, and their first endurance challenge since day 1, two people emerged victorious from the competition. No, one of them isn’t Victoria.. in fact, she was so far behind it would have taken her about 8 hours to fill the bucket.

Frankie and Christine were neck and neck for quite some time, at least I thought they were because the camera crew forgot about Caleb for what seemed like 20 minutes or more.  Nicole also jumped out early but fell back and faded away toward the end of the competition.  I was certain Christine was going to win, and then the crew remembered Caleb was also playing the game and put a camera on his jug. It was nearly full and he was already reaching in to reach for his ball.  It took him another few trips, but in the end, Caleb won the head of household like he said he would do if endurance.  He dropped to the ground and complained about his knee, and the cameras have been off since. I’ll update this thread if I see anything more about his injury.

In other news, Derrick fell out quick and unlike Victoria he recognized it so he went for the reward. About 20 minutes before Caleb won HoH, Derrick pulled out the ball for a $5k reward and a punishment of being shouted at for the rest of the season.

I will stay awake for a bit to check on Caleb, so keep checking back and I’ll update this thread when the feeds return.

Ok, people are recovering, so I am going to head to bed. Was a long day.