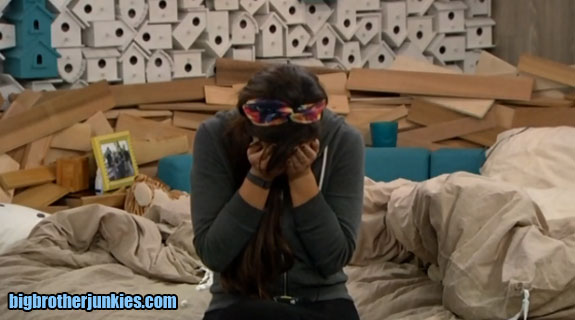 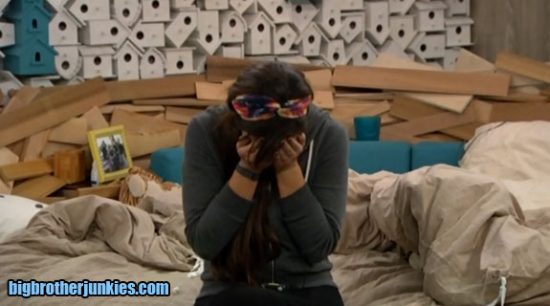 What happened last night in the Big Brother house is funny to me on a fan of the show level (and not a blogger). Last week, Cody and Derrick formed an alliance with two good people – Hayden and Nicole. It sounded like the perfect final 4 where regardless who won, at least it went to someone you liked.  Adding Donny would have just been icing on that happy alliance cake. Things were going smooth until Caleb randomly asked a question “Why are we getting rid of a number”, and the wheels started turning in Derrick’s head which ended up spinning the entire house around to voting Jocasta out.

It took only a handful of days until that decision already came around to bite Derrick in the butt.  Last night around 10:15pm (flashback here), Zach must have been bored, so he pulled Victoria into the beehive room and decided to come clean on some alliances, like his own (the detonators). Why? It’s Zach being Zach, but that move set off a chain reaction of drama that went on well into the night.

Victoria was hurt by Derrick’s side alliance (did she think he was a floater, too?) and said it felt like a boyfriend had cheated on her (a little dramatic). Victoria runs to Nicole and tells him everything she knows, who then tells Cody who confronts Zach.  Zach denies it and denies it once again when Derrick confronts him on it after he heard about it.  Zach tried spinning it that Nicole told Victoria everything Zach told Nicole, but that was short lived.

By around 2:30pm, Derrick was up in the HoH room with Nicole and Victoria clearing the air and Victoria ended up crying because she was so upset over it all. Derrick leaves the room, calls the guys up into the HoH room for a house meeting where Zach admits he was the one who told Victoria.  Some yelling went back and forth between Zach and Victoria, but it’s a typical Zach situation where everything gets blown way up and a lot of yelling about nothing happens.

This is why it’s all funny to me. Derrick and Cody knew how much of a loose cannon Zach was, but they decided to keep him and stay with an alliance full of untrustworthy people over Hayden and Nicole.  It’s hard to completely blame him because they were with Christine, Frankie and Zach from the beginning, but I think they had a really solid opportunity and wasted it.  Although, I know I’ll be eating my words if Derrick and Cody are sitting in the final 4 with Zach and Frankie or Christine.  As a game player, I’d much rather take Zach to the final 2 than a likable Donny, Hayden or Nicole.  At the end of the day (damn you Caleb), Derrick or Cody will be better off taking a bunch of snakes to the final 5 than they would good people. They’re there for the money and that’s the best path to win.

On that note, the fan in me is still enjoying watching it blow up in their face – at least for now.