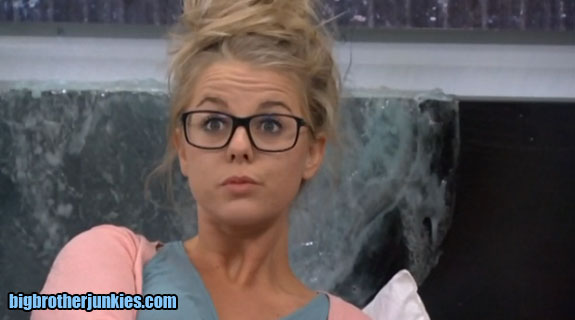 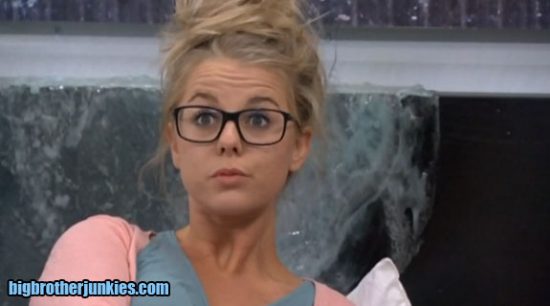 Where to begin?  Well, megaphone man was back last night while Caleb, Derrick and Frankie were in the back yard. Flashback to 7:38pm if you’d like to hear him, but he very clearly said “Frankie is destroying you all in the diary room”.  When he began talking, Derrick started herding the crew inside before they were locked in, but they heard it.. they had to have. I’m pretty sure I heard a ‘sigh’ come from Frankie shortly after he went inside and shut the door.

I know Frankie is not the most liked person in the house (in fact, he’s the least liked after the Victoria comments), but fans have to respect the game a bit.  Despite his comments, Frankie is and was playing a pretty solid game, and if he went home because of something he said in a place that was supposed to be private, that sucks.  It sucks because if it happened to Frankie, it can easily happen to a liked player. That said, if I ever played BB or Survivor, there is 0 chance I’d disclose brilliant plans to the camera crew.  There is no way I could trust my game in the hands of random people who could spill it to some girl in a bikini for a chance at a phone number.

That brings us to today, the PoV meeting. What was expected to be a slam dunk week of Victoria replacing Christine and Nicole walking out the door could get a whole lot more complex if the guys go through with their backdoor plan.  This is the last week they can backdoor a player (everyone will play the POV next week), and the “waste your HoH week” is playing out as Derrick, Caleb and Cody discuss replacing Christine with Frankie and sending him to jury.  I’m not sure if megaphone man had an impact on this, or just the fact that the season is drawing to a close and there are not many more ‘next weeks’ left. The guys know Frankie can and possibly will get one of them out should he win HoH, and they need to get him out before that happens.

What happens at the power of veto meeting today will help set the course for the rest of the season.

Should Frankie be allowed to remain, Caleb passed up his chance to get the biggest threat out of the house, and that will likely bite him in the ass down the line. Why? Because it always bites people in the ass. As a Big Brother fan, this is the time to get Frankie out. If Caleb does indeed pass on this opportunity, he will deserve to finish 3rd or 4th or wherever he may finish.  Should Caleb pull the trigger, not only will he help secure a comfortable spot moving forward, but he’ll probably be considered a Big Brother hero after the recent Frankie-Victoria events.

The guys were supposed to meet during the wake-up call to go over the plan one more time, but at this point I’d probably give it about a 67% chance of actually happening. I’d like to give it a higher chance, but this has been the season of no moves, so not making a move seems almost more likely than not. The only reason I put the number that high is because I want to believe there is a set of balls somewhere between the group of Derrick, Caleb and Cody.

I will be creating a live feed thread shortly, but until then, have a great Labor day!