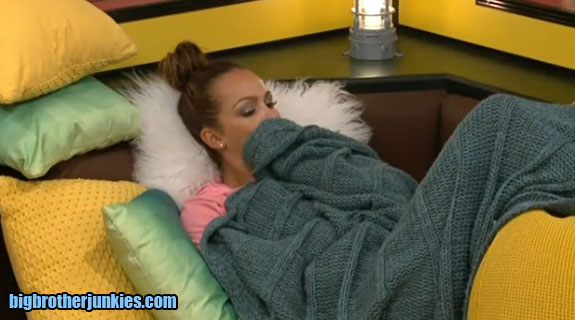 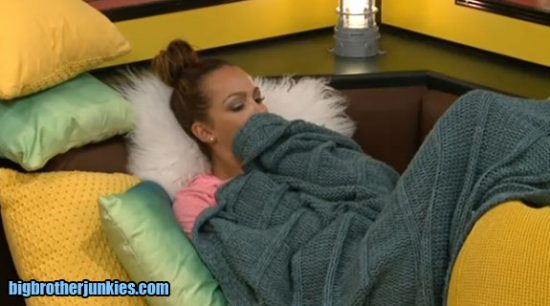 There was absolutely no surprise on the Big Brother 16 live show last night. Despite the weekly highlights making it seem like there was a chance Caleb would be evicted from the house, it wasn’t going to happen. There were a few mentions of it through the week, but as we witnessed during the veto competition when the house celebrated Devin’s defeat, there was only one person they wanted to see walk out of that door, and he did.

The highlight of the live show featured former houseguest Jeff visiting Donny’s family. His family was everything you’d expect his family to be, and it was fantastic TV.  Donny’s parents said they don’t watch him on TV and basically think the show is trash (in so many words). His sisters and girlfriend laughed about the house thinking Donny was some super covert CIA agent.  Then Jeff went through Donny’s daily routine of eating a pop tart and mowing the lawn (Donny talks about that routine quite often). I guess that was about it, and it was a telling sign that a prerecorded family visit was the best part of an episode that featured an eviction and a live HoH challenge.

Devin was evicted with ease at 11-0, despite Christine and Nicole talking earlier in the day about throwing some Caleb votes in to stir the house up. That didn’t happen, and for the second time in three weeks, it was a unanimous vote.  The ‘evil’ Devin was gone, and now the house can back to living in the fantasy land that Big Brother is just a summer vacation… until they’re stabbed in the back by the next person who wants to win.

I do want to mention the last plea each nominated person gets to say. Caleb, wearing an unbuttoned shirt like he was attending some cowboy bbq (and not live television in front of millions), stood up and gave a speech about himself.  Frankie even mocked the speech at around 1:16am on the live feeds because it was that horrible. Mixed in with about ten “beastmode cowboy” references, Caleb essentially stood up and told the house how great of a player he is, but they should vote Devin out because he lied.  Very convincing argument!  Devin, on the other hand, actually gave a pretty solid speech that should have won him some votes, if the house actually wanted to play the game.  He essentially told the truth that keeping in the house is smart because he’ll always be a target, and then went on to apologize for his behavior.

Like Caleb, Devin also did have to mention how great of a player he is, and that probably would have done him in if the house hadn’t already made up their minds days ago.  Here are how two former players weighed in on the speeches…

“Beast mode cowboy” is one of the most embarrassing things I’ve heard someone say with pride. And I have known a lot of embarrassment. #bb16

Devin had a solid speech going until he told everyone he was a competition beast. #BB16

As I mentioned above, Devin went home and all is well in the BB16 house. For now.

Regarding the HoH competition, if you only watch the CBS episodes, you don’t know who won and will find out Sunday night, but I have spoilers below…

After Big Brother screwed us live feeders by blocking the entire competition from the feeds, they returned to reveal the winners of the competition

Seeing as Frankie is part of Team America, and they have been assigned the task to nominate a physical threat, here are the expected nominations today…

Yea!  Get out those physical threats!  Wait… where are the threats?  Where is Beastmode Cowboy? Zach? Hayden?  America wants a physical threat gone, and they vote four people who have done next to nothing all season? Well done, Team America.  Well done!