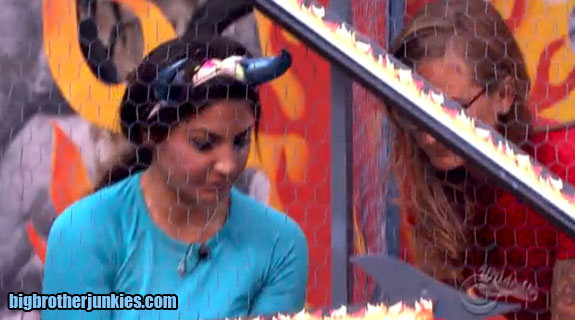 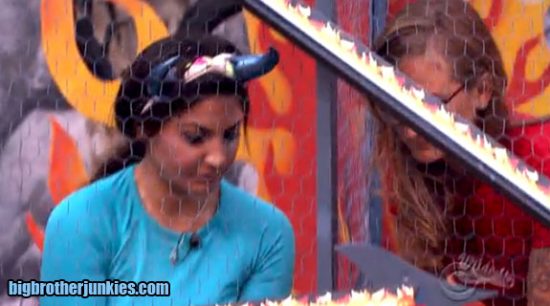 Big Brother picked up right where it left off on Thursday night, with the houseguests finishing the HoH challenge. Their goal was to stick their fingers through chicken wire and transport an egg behind a fence.  All they needed to complete was a dozen eggs, and the team of Zach/Amber were cruising through the competition until Victoria struck!  Just kidding, she broke a ton of eggs and didn’t even have a chance. Coming from behind were Frankie and Cody who found a rhythm and pulled out the HoH win despite Amber/Zach needing just 1 more egg to win.

This was Frankie’s second HoH win of the season, but the first time he would receive a basket from home.  His other win was the first of the season, and they did no baskets for those winners (Frankie/Caleb), so we didn’t have to hear much about his sister.  I was certain Frankie was going to walk around in a complete panic thinking the houseguests were going to enter the HoH room with a life sized cardboard cutout of Ariana Grande, but he didn’t. In fact, he didn’t really mention it at all except for his relief when the only picture he received of her was when they were kids wearing makeup. Where did the Frankie from week 1 go?  He would namedrop Ariana every chance he got, but surprisingly he hasn’t mentioned her in awhile.  Is this a new Frankie?

Moving on, we had alliance #4,289 of Big Brother 16 form this episode, and this is a spin-off from the ‘Bomb Squad’ group. It’s basically the same group minus Devin, Caleb and Amber, and this group is called the ‘Detonators’. A little fun fact for those of you who don’t follow along, despite making it seem like the alliance was formed after Devin was evicted, it was created a day or two prior. CBS just edited it to make it seem like it was after, I guess for consistency.  To be fair to CBS, it’s hard to cram everything that happens from Sunday-Thursday into about a 15 minute segment on Thursday night.

Nominations were pretty uneventful. Cody chose Victoria and Brittany and Frankie chose Amber and Jocasta. That means 4 of the remaining 6 girls in the house were nominated, yet they are too busy arguing over who shares a bed with Victoria rather than worry about how long they’re going to be in the house. Even Amber asked why she had to be the pawn when they were so many other good options, and she’s right. She is starting to see the writing on the wall, and it’s not looking good for any of the females in the Big Brother house.

Also, Team America was given their second mission. We had to vote on whether or not we wanted them to try and nominate a floater or a strong player. We chose strong player, so they immediately thought of the perfect person – Amber!  Wait, what?  Amber?  Don’t get me wrong, I’m sure Amber is a pretty strong player, but I don’t think that’s who America was picturing when they cast that vote. I suppose she is considered the strongest of the females simply because she may be the only one who realizes her days are numbered, despite being ‘safe’.  The show revealed a ‘mission accomplished’ check, but I know many fans didn’t really feel this mission was completed. I suppose it’s all subjective because Big Brother can’t tell them who to think is a strong player, but it’s still a cheap win for them.

Finally, the episode finished with a really cool battle of the block. It was a chess themed game where each of the four nominees were to stand on a chess board and act like knight pieces. They then played Wizards Chess from Harry Potter and the last one standing won! Just kidding, the game was cool, but not that cool.

The object of the match was to move in the Knight’s L shape and flip the piece you end up on. Nobody else can move to that piece and if you have no more moves, you are out of the game. I don’t want to play this game, I NEED to play this game. I am typically not jealous of the Big Brother cast members for the carnival style competitions they do, but this was great. Finally a competition that didn’t completely rely on luck, strength or endurance.

Jocasta was pretty quickly eliminated from the game making it Brit/Vic on just Amber. Things were not looking good for Caleb’s Queen but suddenly Brittany was out of the game and it was just one on one. Amber made a solid move, and Victoria was left to basically put herself into ‘check’.  Game over, Amber and Jocasta are off the block and Frankie lost his HoH crown.

Tune in Wednesday to see who won the Power of Veto or keep checking this site for spoilers before they’re on tv!