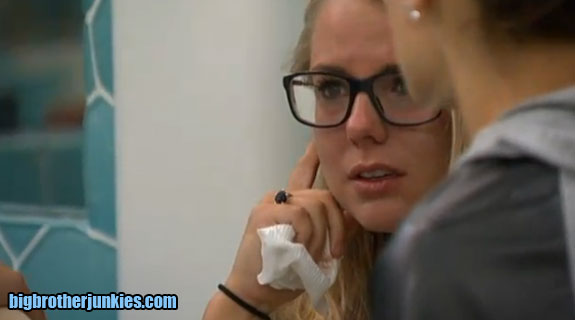 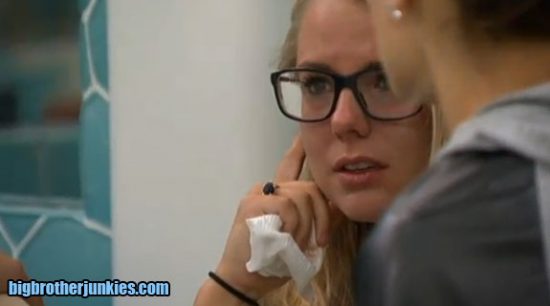 Last night around 3:40am, Zach was preparing his nomination speech that compared Christine to JennCity regarding floating, and also called out Nicole for being a ‘Dingus Fruitloop'(??).  I’m not exactly sure what the second one was, but I think the main objective was to get something going at the meeting for Team America, and that’s what it sounds like happened today.

Zach was unaware he was being used as a pawn for Team America, but Derrick was encouraging a pretty brutal speech at the nomination ceremony today, and when the feeds returned live around 11:43am, it appears that’s exactly what happened.  Nicole was crying because she wasn’t really sure what to do. She felt incredibly uncomfortable and awkward, and probably really confused by a strange insult (if you call it that).

However, Zach may have gone too far because in a different room, Cody was talking to Christine about the possibility of a saboteur. I’m sure they’re going to pin it on Zach and target him for eviction as soon as they can, but that will be too bad.  Zach is the only entertaining person remaining in the house right now.  I was sure Team America was going to screw up the games of that alliance, but it appears to be screwing the game of a random player.

On to the actual nomination results.  They are as expected…

All girls, shocker.  Will this wake up the girls?  Probably not.

Here are some live feed updates:

Battle of the block results….

Christine and Nicole won the BOB.  Victoria and Jocasta remain on the block. Frankie remains HoH