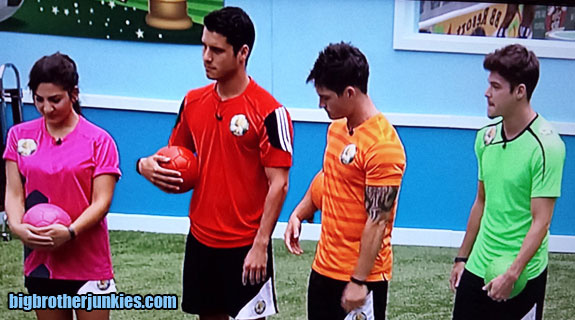 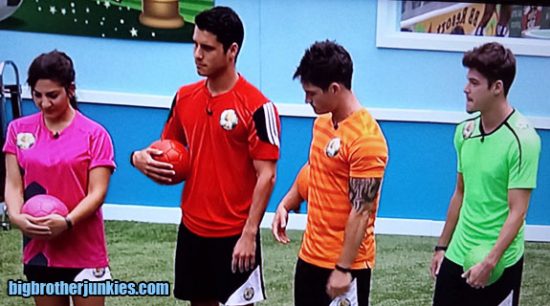 Two weeks ago, Brittany was on the block and things were not looking good for her at all. She was the main target of the week by head of household Devin, and there were no signs of any hope for the mom of 3 (or 10 according to Caleb) until she was able to tug at his sensitive side and pulled a power move before the veto competition.  Devin removed her from the block, and she was safe to live another day.

Fast forward to this week, and Brittany finds herself in a similar situation.  On the block and the main target by the house.  She had already lost the battle of the block competition, so it was down to one competition to save Brittany’s Big Brother summer – the power of veto.

Shortly before the competition, Brittany thought she actually found herself an ally in the game when she found a pouting Caleb outside alone. He was upset about Amber (hold your surprise and read more of that weirdness here), so Brittany spoke to him a bit and actually sort of convinced Caleb it was a good idea to keep her in the house.  I’m not exactly sure Caleb was in the right frame of mind after walking in on Amber and Cody being very close in the HoH room, but Brittany took his word for it and even selected him as the houseguest’s choice for the veto competition. Things were finally looking around for Brittany – or were they?

The veto competition was a World Cup theme, because we haven’t heard enough about the World Cup over the past month. The six players (Cody, Victoria, Brittany, Zach, Nicole and Caleb) were to put a soccer ball in this contraption that kicks it into a huge net with sections/scores (think of a carnival game). Every round, the lowest score was eliminated, and they were to take their prize from the trophies. Seeing as this is Big Brother, they could keep their prizes as long as nobody who won in later rounds wanted them.

Round 1 –
Cody was eliminated first, and naturally his 6th place prize was the power of veto (knowing full well he has 0 chance of keeping it, they give it to 6th place)

Round 2 –
Brittany was the second person eliminated, and won ‘Penalty Kick’. This is a punishment where the player gets kicked in the butt 10x every time a whistle blows for a full day.  Naturally, Brittany took the Veto from Cody.

Round 3 –
Zach Attack become the third person eliminated and won… a trip to Germany!  Seeing as he was in no real danger of being a replacement nominee, he kept his prize and offered any ladies out there a free trip to Germany with him.

Round 4 –
Nicole was the fourth eliminated and won the punishment ‘Goal Oriented’. The player would have to kick a soccer ball into a net 2,400 times in a 24 hour period. There is no way she was going to keep that, so she took the trip to Germany!  Oh wait, she didn’t. For some reason she took the power of veto from Brittany while knowing Victoria was guaranteed to take it from her. Maybe Nicole doesn’t like to fly?

Round 5 –
Victoria became the fifth player eliminated and won $5,000. Considering Victoria is on the block, she decided it would be a better idea to take the Power of Veto from Nicole making the current prizes look like this…

Caleb was the last person standing, so he had the choice of any prize, or to keep what was in his trophy.  That reward was a germitard (German unitard). Sadly, Caleb did not want to wear a unitard for a week, so he was going to trade it out.  What would he choose?  Germany?  Money?  or Power?

Being the team player Caleb is, he swapped prizes with Nicole and will go home with an extra $5k in his pocket.  This had everyone scratching their heads because it forced Cody to nominate someone else, and Caleb essentially gave up immunity for the week for $5k. Very shocking move as the guy who was making the nominations was the same guy who feels threatened by Caleb’s obsession over Amber. Would this bite him in the butt?  Would this go down as one of the worst moves in Big Brother history?

No, not this season. Not this group.

I hate to compare the shows, but if this were Survivor and a super strong player like Caleb handed over immunity for $5k, he would be the next person going home.  Despite some back and forth last minute decisions by Cody, the big renominee after Victoria saved herself was – Donny!  Yes, Donny.  Donny.  I have to say it one more time – Donny.

Cody had a chance to get out a strong competitive player who is extremely jealous of the friendship he has with Amber, but instead, he went with the house choice to use Donny as a pawn so Brittany will go home this week.  The season of questionable moves continues and one of the least threatening people in the house will go home on Thursday evening.  What a weird season it’s been.

Check out OK Magazine for more of my Big Brother recaps!