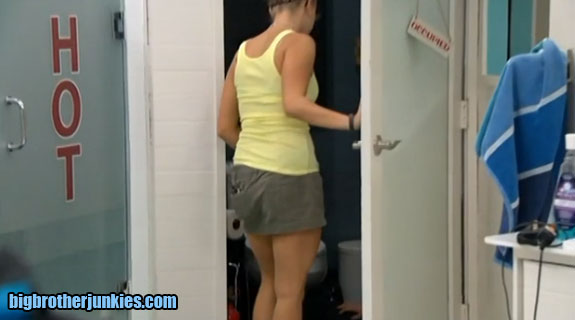 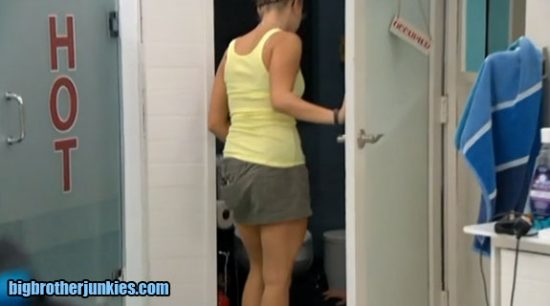 Victoria is not doing so well in the Big Brother house. Over the past few days, her wisdom teeth have started to really come out and they have been killing her. Today at 11:15am, she went to the bathroom for awhile until Nicole finally checked on her and found Victoria laying on the floor sweating. She yelled for Derrick and the feeds cut. I wasn’t home today, so I am using my buddies at BBN for the timeline, but here is what happened..

At 1:56pm, Victoria finally returned from the DR where she said she was given some IV for dehydration and has more meds on the way. Before anyone is thinking of her going home, due to the fact that there are still 8 people in the house until Aug 28th, I have a feeling her leaving would not change the outcome of this week (unless production used it to keep someone in purposely).  I doubt anyone is wishing ill will on her, but I am sure some of you are hoping she has to leave for medical reasons in an effort to save Donny or Nicole, but I don’t think that will happen.  Maybe it will, but I doubt it.  Eviction will likely still happen as planned.  What you could hope for is Victoria beg to be a replacement nominee and be evicted on Thursday, but I doubt that will happen either.

The other big story in the house  (if you want to call it big) was that Cody won the power of veto. Donny was going home this week or next, but now it appears it will be sooner rather than later.  Unless production gives Team America to keep Donny, I don’t think Derrick will do a whole lot to save him.  That said, once again according to BBN, Donny approached Derrick with the new Team America mission.  Donny told Derrick the next mission is for Team America to set it’s own mission this week.

I don’t even know what to think about this mission. Is it lazy?  Is it productions attempt at saving Donny without actually being so direct?  Donny certainly took advantage of the situation and suggested the mission be to save him, and he said fans will vote on whether or not it was a good mission.  Frankie finally got wind of it, and he suggested throwing a Big Brother play and have everyone involved.  If that becomes the mission, I’m done with this Team America gimmick. A play? Really? A play?  Come on, Frankie. We don’t want to see a freakin play, we want to see drama. We want to see underdogs have a chance to win. We want to see good game moves.  If we wanted to see a play, we’d go to the damn theatre.

I am super tired after a very long day (got my wedding suit, yay!  I look sharp as hell), but I also picked up a coffee on the way home so I may be able to bust open a live feed thread for the evening.  Either way, discuss the veto, Victoria’s health and the stupid BB play.