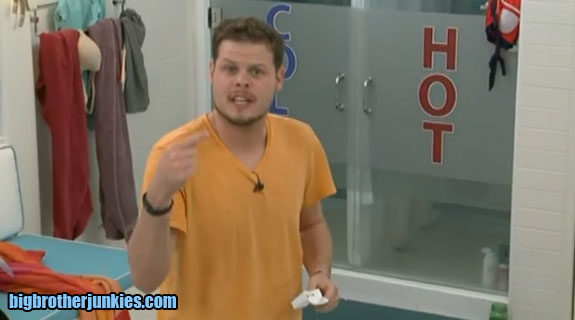 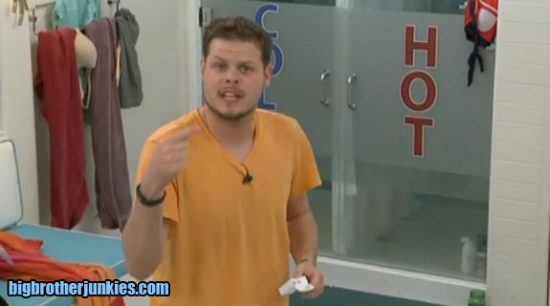 Before I begin with the recap, I changed my mind on donations.  Instead of buying the xbox I’ve been craving, I am going to give any donations I receive (and have received) to my parents to help pay their medical bills. They have insurance, but co-pay after co-pay adds up very quick, and considering she got me into BB in the first place (cheering on chicken George in season 1), it would be only fitting to have the show (and it’s fans) help her.  Back when I lived with them, I remember waking up some mornings and she would be glued to her computer screen watching the feeds all night.  It was hilarious to me, I thought she was nuts, but look at me now..

Anyway, if you’d like to contribute to their increasing bills, feel free to donate.  If not, I completely understand as your prayers and encouragement are more than enough! I am eternally grateful. Love you all.

So, the live feeds were dead all afternoon.  The house had to wake them up again at 5pm est otherwise they were just going to sleep through their Wednesday.  I was certain the night would be just as dead and I’d be bored to tears watching them make stick houses.

Just as I was about to give up on the feeds for the night, Donny, Derrick and Frankie started chatting about the Team America mission. They received notice that during tonight’s live eviction show, Julie Chen is going to ask the house what they would prefer to eat if they were a havenot.  TA is going to say ‘Apple Pie’ and Julie will respond positively or negatively to that request.  That response will secretly be letting TA know they passed or failed their mission this week (they were told to make up their own mission we would find entertaining).  I think that’s a pretty cool way to communicate and should be fun to watch, and will be even better if they can continue it next week… but Donny has to remain for that to happen.  (well, I don’t think he technically does, but TA is dead to me if he goes!)

Donny said some words that I think stuck with the pair and helped fuel the night.  He basically said you’re going to have to convince me this was the right move because I’m not seeing it.  Nicole is an easy elimination this week considering she was brought back into the house. For him to leave and her to stay under this situation makes no sense to him, especially with Team America, and ESPECIALLY considering they only need 1 additional vote for Donny to stay. It just takes 3, and Derrick/Frankie make 2.  I don’t remember the words exactly, but that’s generally how the conversation went.

They broke up and Derrick had a talk with Caleb about it who was apprehensive about the idea at first, but then left the room to talk with Frankie and actually sounded more like he wanted Nicole gone before Donny.  This made Frankie very happy, so he did a spin dance move in the pantry thinking Donny may stay… 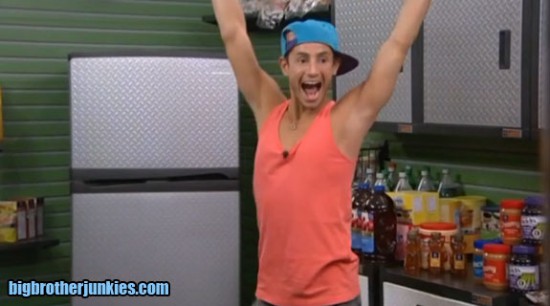 Well, it was time to speak with the fourth member of their bro squad (my name for them, not theirs) and Cody’s role is apparently ‘Buzz Kill’.  He wanted NO part in the keep Donny plan. No part whatsoever. It was actually impressive to see Cody stand for something, despite it being something I opposed.  He did not waver at all while speaking with Caleb and Frankie about it, despite both hounding him with reasons why Nicole should go first.  Cody has clearly drawn a line in the sand and does not want Donny to cross it.  While I respect that, it was very frustrating to see him be stubborn about it because Caleb started to break down and the war started turning right there.

After their talk, flipflopper Caleb went to Derrick and started chatting about how they should probably keep Nicole instead now. Derrick, being mindful of his own game, didn’t disagree. Derrick simply doesn’t completely trust Donny and nor should he.  Donny is in it for Donny just like Derrick is in it for Derrick.  It was pointed out how in BB14, Dan convinced Frank to keep him one week and then the next week got him out of the house.  That is what made Dan such a great player and feared Donny may do something similar (and he may at this point).  That said, everyone agreed Nicole has a much better shot at winning HoH this week, especially if endurance, so keeping her could quickly bite them in the ass.

The talks died down, and it appear Donny will be leaving the house, but I don’t think it’s the end of it.  Caleb and Derrick will be talking once more today and this could come down to the wire. It may be the first time in a long time I don’t know exactly what’s going to happen during my eviction prediction!

I will be updating you later on as the house wakes up and starts to chat. It will be tough to gain any insight because the feeds go down a lot on Thursday afternoon, but I’ll do my best. Have a good Thursday, the long weekend is almost here!