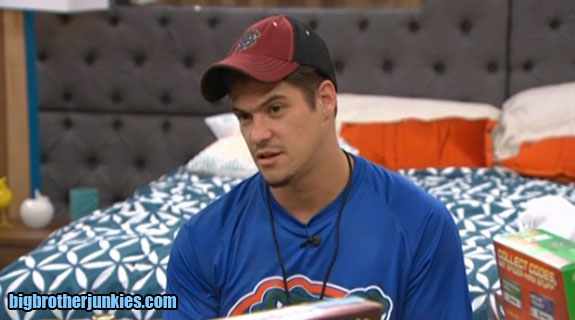 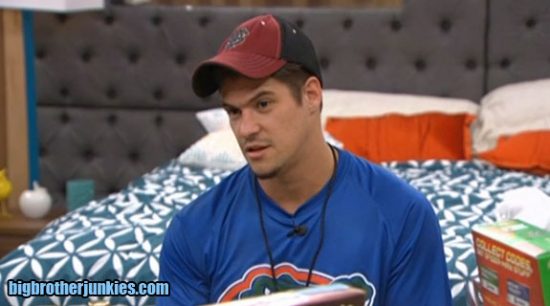 One positive thing that happened last night from the HoH competition is that Zach won. Without a doubt, Zach is clearly the most entertaining person remaining in the Big Brother house, and that’s pretty much because he doesn’t care about anything.  His message to Brittany last night summarized Zach’s season when he said something like “We may not be friends out of the house, but I don’t care”. That’s so Zach it hurts. Everyone else has been dancing around trying to be nice, while Zach will slit your throat and then ask your best friend out for coffee.

Last night around 11:40pm (flashback), Zach had a long talk with Frankie about something I’ve certainly been thinking. What has Christine done for the alliance?  What has she done in the house?  According to Zach, she sits around laughing at everything (which is painful to listen to), and doesn’t have a care in the world. Frankie has blood on his hands, as does Cody, Derrick and soon to be Zach.  However, when Zach approached Christine about being nominated and throwing the BoB competition, she rejected the idea. She wanted nothing to do with it, so that set off Zach for the night.

This also boasted well for Team America as their mission this week is to get an argument going at nominations or veto, and who better to instigate into one? Zach!  Derrick and Frankie seized the opportunity throughout the night and continued egging Zach on about the situation. They want him to have a pretty Zach-like ceremony that ends up yelling and screaming (let’s hope it works!).

Despite all the Christine drama, the real target in the house is Caleb or Amber. They want to treat it like Devin and backdoor one of them, so the likely 4 nominees after today will be … Jocasta, Victoria, Christine, Nicole.

Hmmm, I notice something similar about all 4 of those people.  Nope, they don’t all wear glasses.  They’re not the same height, nor do they come from the same state.  Oh, right. They’re all girls!  What a shocker!  Even if Caleb is the main target this week, if these 4 girls are nominated and don’t get together at some point and realize they’re being pegged off one by one, they deserve to lose. I don’t know how much more obvious the guys can be with their intentions without actually telling them directly, but we will see if they actually notice this.

Nominations are today as is BoB. Hopefully this will finally spark some drama in the house, and if it does, I will be covering it in full detail!   If not, well I’m going to go back to sleep until Thursday night.