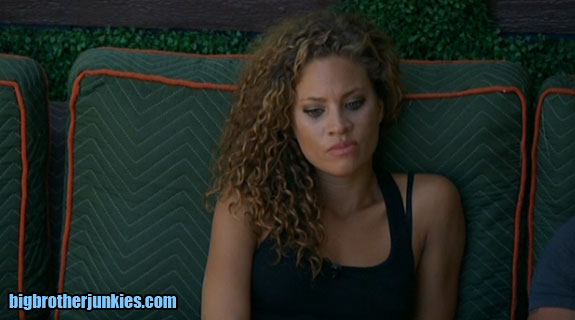 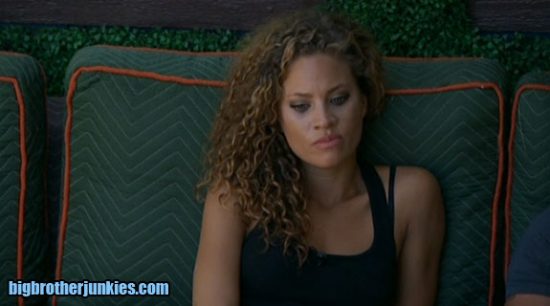 Amber very concerned about her future in the house

The first week of Big Brother 16 was about as boring as expected. Everyone is getting along, everyone thinks they’re going to win $500k by suntanning and occasionally eating glorified oatmeal as a punishment. People form stupid alliances and even the week 1 nominees hardly ever really campaign because neither believe people actually go home.  Then the first eviction hits and things get real, and that’s what happened last Thursday. Joey walked out the door and players started to realize it won’t be all relaxation and competitions (like Devin or Caleb thought. One of them – I forgot who – said competitions are like 90% of the game).

Use the flashback feature to see all the drama

Yesterday, Devin made the first big game move of the season (note: I said big, not smart) by removing Brittany from the block and replacing her with Zach. This is 100% due to the fact that Brittany went up into the HoH room a few nights ago and had about a 90 minute conversation with him, and managed to tug at all the right strings.  She played the parent card, how she sacrificed so much being there and it would kill her to go home before the jury *. Devin not only bought that hook, line and sinker, but he even managed to get a crush on her.  Yes, really. Tomorrow night you will suffer through Devin acting like Caleb around Amber (Joey really screwed up by not flirting her way off the block. It would have been easy).

* – People mention making it to jury quite often, and that is so they are guaranteed a summer of stipend by Big Brother. By being stuck in the jury house for a few weeks, they get a free vacation and are paid over $1k/week until the season ends. Those who go home before jury only get paid a few weeks, so making jury is a guaranteed $5k+ bonus

Around 11:06am on the feeds, you can hear Devin practicing his PoV speech, and some of the stuff he said was taken directly out of the mouth of Brittany during her plea. That is when I knew the feeds were going to be a fun watch, and I wasn’t disappointed.

At 1:35pm, the feeds returned from the PoV meeting and the house was in pure chaos. I sat there with my headphones on, quad cam going and trying to listen to one conversation with my left ear, and another with my right. It was madness. Everyone was talking about the wild PoV meeting and that is because Zach completely blew up during it.  He called out Frankie, Hayden, Nicole, and half the house on stuff I’m not even sure he knew what he was talking about. It sounded like he just lost it and started ranting like a crazy person, and I beg CBS to show the entire meeting!

by 1:45pm, Zach was exposing the entire bomb squad alliance to Hayden who already suspected something due to hand gestures between Caleb and Devin during competitions. Hayden went to speak with the other people who were still downstairs, and also revealed something of his own. Amber, Caleb and Devin told both he and Nicole about the throwing botb plan and how they were safe this week. Amber denied it, but it did not look very good for her.

Fast forward to 3:06pm and you have the first real heated argument of the summer. Paola and Zach started recapping the situation, and then when Zach basically mentioned he felt safe, that pissed off Paola and the two started screaming back and forth how awful each other is. They eventually made up, but a lot of nasty stuff was said during this argument and worth the watch.

Things started dying out, but the house was still left in shock and trying to wrap their head around what happened. Devin and Caleb were in full damage control, Zach was trying to fix the stupid mistakes he made during the PoV meltdown, and Amber sat there like a ghost for a few hours.

Moving forward, Zach has so far been able to repair some of the damage and has gained a few points back on Paola.  Here is where I currently have them sitting… 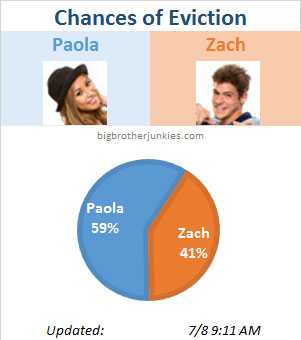 This could change the more Zach opens his mouth, but as of right now he is in good shape. Check back later for live feed updates.  Let’s hope today is even half as eventful as yesterday!