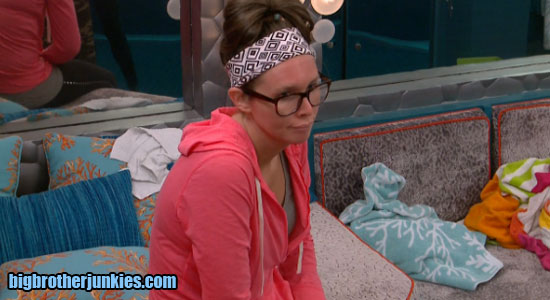 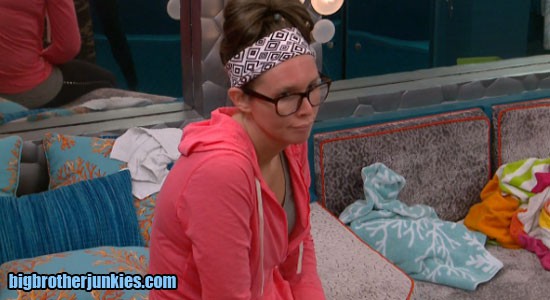 Leave it to Audrey to keep things interesting in the Big Brother house. While she may have been hibernating for the better part of a week, she exited her shelter (bed) and pulled Da’Vonne aside to have a talk.

If you want to watch the conversation, flashback to around 8:42pm last night. (Get live feeds here for free)

Why the sudden change of heart? Good question.  Possibly due to Audrey playing a pretty horrible game (entertaining, but horrible) so far this season and realizing she is on the bottom of whatever totem pole she decides to hang her hat on (or is it top?… bottom, right?  I figure top may be worse in this situation since they’d probably start cutting a totem pole apart from the top down…. wow, rambling. Boy, did I miss fast internet)

You know it’s bad for Audrey when the biggest potential ally in the house is someone who absolutely hate(d) her just a few days ago.. but that’s Big Brother for you.

So, Day went around quietly campaigning last night, and while she may have a vote or two secured (like Jason and apparently Audrey), those additional 3 votes seem further and further away from Day than she realizes. Another thing she has working against her is time. If you don’t have votes secured by Thursday morning, you’re in a bad situation. If you still need a solid 3 votes, you’re screwed.  Thursday is typically the day the house shuts down mentally and just turns the page to next week.  They spend the day getting ready for the live show, and rarely have time to pull people aside for one-on-one’s.  Can it happen?  Sure, I’ve seen crazier things, but I don’t think Da’Vonne or Audrey have the skill to pull it off. They’re just not good players.

In another news, Julia came clean to Vanessa, who promised to keep her secret and even help her (if you didn’t know, Julia is Liz’s twin).  Vanessa let Clay and Shelli know about the confirmation, and they decide they need to do whatever it takes to keep Liz in the house until both twins are in. This gives them another number in their alliance, and makes them even stronger odds as the final 5.

I will create a live update thread shortly because I know there is going to be some scheming going on today by Audrey and Day, but if you have Da’Vonne leaving in your office pool, I wouldn’t be too worried.