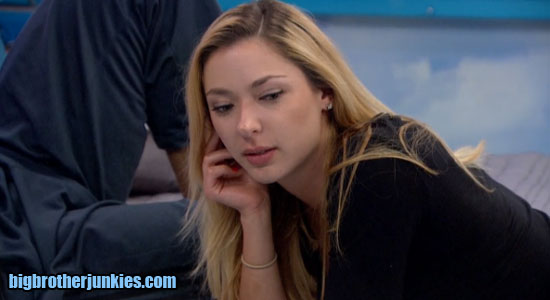 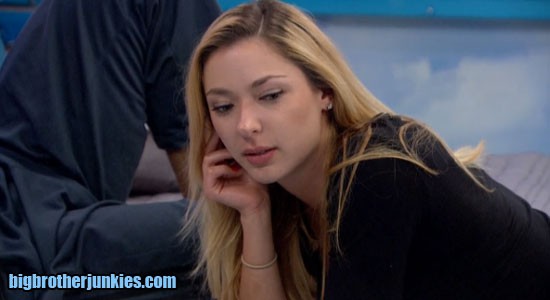 Note – I am going to have a live update thread going on later today. I have declared this an emergency beach day as it’s 90 degrees here (I know people down south are like.. woah, that cold?).  However, I wanted to update on the developments last night before I went.

When Liz won the HoH, it seemed absolutely certain that Becky was screwed. Barring a power of veto win, you could have chalked her up to going to jury next Thursday night. However, something strange happened around 2:50am or so on the feeds.

Becky was up in the room with Austinizia and had a real honest talk with them, completely exposing Vanessa’s game thus far this season. And unlike Vanessa’s method of just saying it over and over until people believe it, Becky backed up her argument with week by week examples of how Vanessa has been loyal to only one person this season – herself.  It was quite fascinating listening to her explain it while using cereal as a diagram. 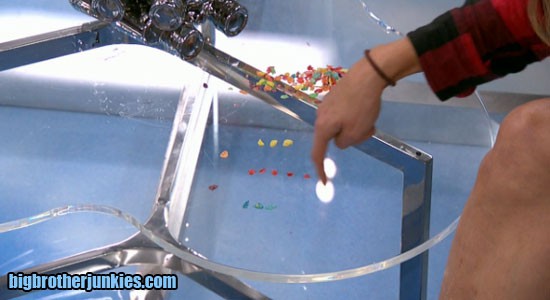 (in the picture, blue = Austinizia. Yellow = Shay and Vanessa. the top two are floaters John and Steve.  The red are James, Becky, Jason, Jackie and Meg)

The way she described it was that the red felt the yellow and blue were going to throw grenades at each other, but instead they started throwing them at red. Things started changing when Vanessa (Y) and Jackie (R) won HoH together. Jackie said that she wanted Liz out of the game, and this was the week before Julia was set to enter (note: Becky counted both twins as they knew they existed and Julia was going to enter, despite only 1 being in the house at the time). Vanessa liked the idea and they quickly arranged a plan to make it happen by putting the ‘All American Team’ of Clay (Y) and Becky (R) up against Liz (B) and then one of the remaining reds who were to throw it. That ended up being James.

When Liz basically won the Botb by herself, Becky pointed out how upset James was by it. The room was like ‘oh wow, you’re right. He seemed unhappy to win and be safe’. Becky then pointed out now with Clay vs Becky on the block, Vanessa quickly distanced herself from the group and pulled a whining act of how she’s been treated.

Needless to say. Becky’s brilliant talk with the trio really opened their eyes to Vanessa’s game. The big question this week is – will it matter?  Liz doesn’t sound like she wants to make a big move, but they do like the idea of getting out Vanessa. So, if they work on keeping Becky safe, they know they’ll have someone in the house who will be more than happy to do their dirty work there. Becky will also probably request that her two allies remain in the house, so she has something to fall back on, which is bad news for Steve and John.

I don’t know who they’ll put up today, but I have a feeling it will be either two pawns, or a pawn and a throwaway person (someone they don’t mind leaving assuming the veto doesn’t work right).  Either way, with this news to the group, Becky is clearly not going out without a fight, and Vanessa is certainly going to have to keep working her butt off if she wants to win this game.

Be back in a few hours with some live updates!