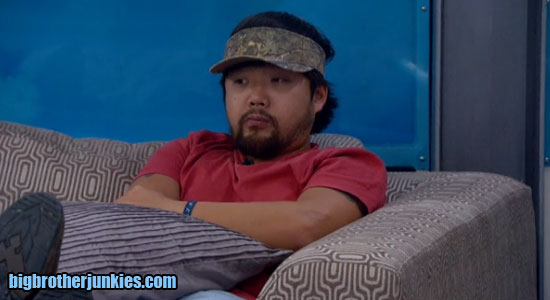 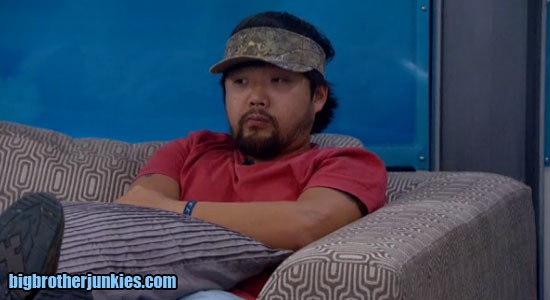 As expected, Clay and Shelli made their final push to stay in the house together last night when they pulled James and Meg into the HoH room. That is exactly why they have been cordial with James and pretending not to be upset because they knew they needed to make this play. The question is, will it work?

Around 10:00pm (flashback here), the talk began and it went pretty much as I expected. Clay and Shelli pledged their loyalty to James and would even go as far as letting him know if his name is being discussed as a nominee potential (woooo, big move!). For the most part, James humored them for the better part of an hour and made sure if he does replace one of them, both he and Meg would be safe. Of course they said yes, final 4, etc, etc, but I could tell just from watching it that it was a very hollow talk.

Neither side can trust each other, and most of the distrust from James stems from Clay and Shelli trying to ride the middle while Jason got evicted. They played innocent, and have been casually throwing Vanessa under the bus. They haven’t name-dropped, but we all know who they’re referring to when they say they had nothing to do with Jason going home. Vanessa was HoH, so there aren’t many other people they can be talking about. That side of the house tried far too hard to avoid any ‘blood on their hands’, but sometimes in games like this you get messy.  You either own up to it, or you play dumb when someone asks why you’re covered in blood (metaphorically of course, although it would be an interesting game otherwise).

I zonk out, expecting to wake up with a decision already made by James, but at 6am, he, Jackie and Meg were still awake discussing the situation. They laughed about Clay and Shelli trying to get Steve as a replacement option, and just about finished up with saying ‘Yup, we’re sticking with the plan’ (of getting either out, but likely Shelli if they can). Then, just before the conversation ends, James makes a weird statement about cutting the head off the snake, and the girls ask who the head is, and he randomly chimes in Vanessa. This leaves them wondering what James is actually going to do at the meeting, and they’re not alone. James wouldn’t confirm nor deny putting Vanessa up, but him tossing out her name like that definitely threw them off.

Getting Vanessa out is probably the best move (while having a fake few week deal with Clay and Shelli), but I don’t think enough of the house understands just how much Vanessa has her hands in everything. If James does replace one of them with her, the person sitting next to Vanessa will probably go home. It takes 5 votes, and even if they can convince Shay (I like that better than Clelli) to vote with them, they’d still need to convince 2 more people that Vanessa is the bigger threat.  Possible, but very difficult.

We will see what happens this afternoon as we have a few hours before the ceremony. I’m sure once James/Meg/Jackie wake up from their naps, they’ll discuss it a bit more, but as of right now there is nothing certain on what will happen today.  Just the way I like it!