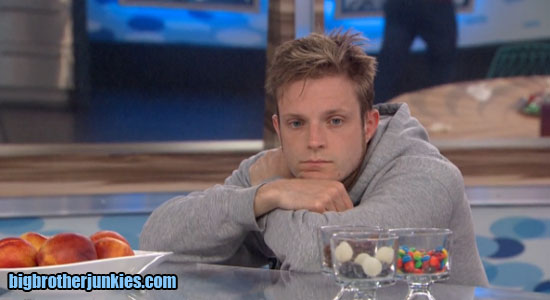 Important Update – Check your cable listings. Roger Goodell may be looking like an idiot tonight because of my man Brady, but that doesn’t mean the NFL isn’t going to screw with Big Brother in many regions. Check your DVR’s to make sure everything is squared away.  (see note at the bottom about Brady)

Wow, I cannot believe we’re already at the point of the season where there are only two Thursday’s left after tonight(!!).  The end of the season is coming up super fast, and it will feel even faster in a few hours when two more people walk out the door of the Big Brother house.

I will say, my favorite nights of the season are double eviction nights. They were always fun before, but as a blogger, they are the best. No spoilers, no waiting around, and most important – no watching Liz and Austin in bed for a week between evictions. I am finally a viewer like the non-feed watchers, so I have no clue what to expect. It’s great!  I wish the house had 30 cast members and a double eviction weekly.  Ok, maybe not.

As far as the first vote, here is a little secret – I try to avoid feeds on Thursday. This is because feeds mostly consist of Jeff’s awkward interview and feed highlights, but also because I have a deep down hope that the house flipped and I am surprised come eviction time.  I fully expect Meg to walk out the door, and will be shocked if it doesn’t happen.  Maybe Steve had another change of heart today?  Doubtful.

As far as plugs go, I told you guys I was done asking for donations after L.A., but I certainly am not done plugging my Instagram | Facebook | Twitter. The Instagram is my personal one, so if you want to see my amazing (boring) life, follow that.  The FB/Twitter are for Big Brother, so follow those for updates.

Note – I am going to likely update more than usual, because I know some can’t watch it at all.

I know people think Brady is a cheater (he’s not), and it’s not fair he isn’t suspended (he shouldn’t be). The reality is, the only thing Brady is guilty of is trashing his phone.  Yes, it’s a bad look to do that, but when you give a guy a fine for not cooperating with league investigation (Mr whip it out Favre), you simply can’t suspend another guy for 4 games.  It also looks very bad when the league hears the appeal.  What kind of system is that?  If a judge sentences you to something, and you’re allowed to appeal, how stupid would it be to only be able to appeal to the same judge?  An independent 3rd party should have heard the appeal.

This win is good for NFL fans in general because Goodell is a horrible commissioner who arbitrarily handed out punishments based on fan reaction to things. There was no consistency with his rulings, and if the media made a fuss over something, he’d go harder than someone who didn’t make headlines. That’s a terrible way to discipline players, and he has had his butt slapped over and over as a result. Almost every one of his major punishments were overturned because he’s a lousy leader who really needs to be replaced if people want the NFL to keep succeeding.

Look at Ray Rice. Goodell slaps the guy on the wrist for beating his wife, but then gets ripped apart by the media, so he practically bans Rice for life. With some consistency, he never would have had to deal with the media backlash over his horrible leadership.

(that’s my 2 cents. I know people think I’m biased because I’m a Patriots fan, but I don’t care about the Saints, yet he was a dumbass in that ‘scandal’ as well)