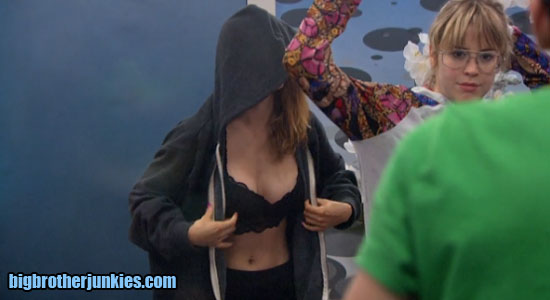 I guess it’s time for some fun in the Big Brother house, even if it is extremely forced and painful to watch. I don’t think I went into detail very much about it, but the Gronk Twist was revealed last night. Every so often, they will tell the house a theme of a party, and they must do it.  Anyone who doesn’t participate becomes a have-not.

This is more of a draining event as they seem to be called every few hours, regardless of sleep.  This morning at 7:30am, they were to have a hot tub party, and most of the house (if not all) were sleeping. I guess this is one way to keep them from sleeping all day.  I expect these parties to continue at least until Tuesday, maybe even Wednesday depending on when they plan on cutting the film into the show. Hopefully they’re all nice and grumpy to Julie on Thursday night.

Alright, time for some updates:  (I may scroll back on twitter / flashbacks to see if anything else cool happened)