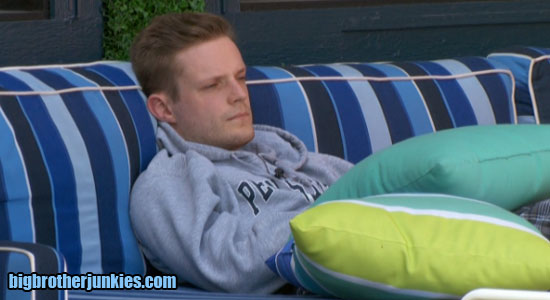 Johnny Mac just watching from the outside - for now

Good afternoon, everyone! Still two days away from eviction, and I think it’s going to be a long two days for some people. If you missed my recap this morning, Jace and Audrey had it out – again. Jeff has been running around openly campaigning against Audrey, even though she’s not on the block. And Austin has done a pretty damn good job keeping the peace with Jace, yet simultaneously distancing himself.  In fact, I think Austin may actually have a few more weeks in him, which is a big step up from a few days ago.

Jace keeps saying he’s going to go out cool and not blow up anyone’s game, but I am having my doubts. I think he’s due for at least 2 more blowups before he leaves the house on Thursday night. We’ll see if today is one of those…

Taking a small break for dinner, etc.  Will start a new thread for the night updates