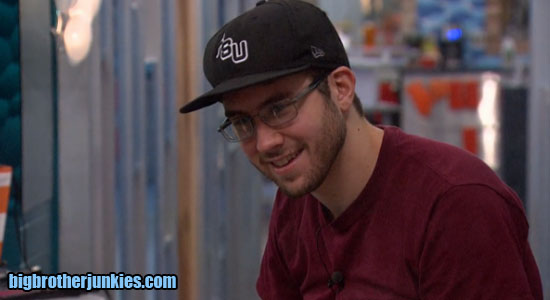 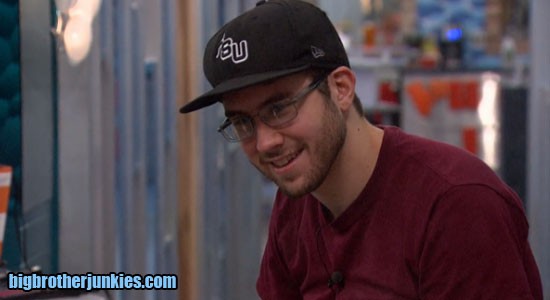 While watching the feeds last night, it was clear of one thing: Steve has his doubts about the vote he’ll be casting tonight. He is a Big Brother historian, and even admits he knows what the fans want (vote out Julia), but he is struggling heavily with this idea. Why?  That’s a good question, and one I wish I could answer.

Heading into the season, Steve was looked at as the next Ian Terry. Comparisons were made left and right, especially when they both had extremely awkward and weak social and physical games early on. They both aligned themselves with a strong target in front of them (Ian had Dan, Steve has Vanessa), and nobody really knew where they stood until evicted houseguests were watching goodbye messages.

The different between Big Brother 14 and Big Brother 17, however, is the whole ‘blood on my hands’ thing that everyone is obsessing over. Unlike Steve, Ian did feel the need to take credit for evictions, as he proudly did with the eviction of his buddy Mike Boogey. As the weeks went on, and battle lines were drawn, Ian became more cutthroat going as far as evicting the girl he had a fake date with earlier in the season (Ashley). Ian is smart, he knew things would never work out with Ashley, so he wasn’t going to risk half a million dollars over a pretty girl who is stringing him along.

What isn’t displayed on CBS and isn’t really talked about a ton on the feeds is that Steve seems to have a thing for Julia. I don’t have any specific timestamps, but I distinctly remember a few times there were talks about how he felt about her, and Julia has indeed taking a liking to him as well – as a friend. The twins show him a lot of attention, almost to an annoying level when they screech ‘Steeeeeeeeeeve’ when he enters the room. So, naturally he is on cloud 9 and probably doesn’t want it to end, especially at his hands.

Is that the reason Steve has seemed to ultimately rejected the idea of teaming up with James, Meg and John in splitting  up the twins? I don’t think he’ll ever admit it, but at this point, I don’t really see many other reasons for him to make this move. Vanessa’s logic is that she has convinced Austin that he can’t go to the final 3 with the twins, so he’d be more than willing to throw future HoH competitions, which allows Vanessa to do the dirty work. She also feels Julia is as weak as Meg in competitions, but we all know that’s not true. So, Vanessa told Steve it will essentially be him and her versus Liz regarding competitions down the line, and he seemed to be ok with that logic. That was until he was up until still discussing the flip possibility with Johnny Mack.

In the end, Steve decided against it. Vanessa indeed is positioning herself in a favorable position by secretly aligning with John, and another alliance with Steve, all while convincing Austin not to try very hard in future HoH competitions. I am actually coming around to the idea that voting out Meg is actually Vanessa’s better option (although Liz would have been a good one), but I still fail to see how this helps Steve.

Perhaps some readers can shed some light on Steve’s logic on keeping Julia in the game rather than just aligning with Meg, John, and James.