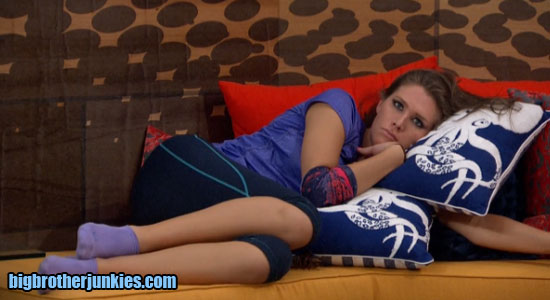 Could Audrey survive another week?

I think CBS should give bloggers a schedule on events in the house, I mean it’s only fair, right? I went to bed last night around 3am with Shelli and Becky still talking to the house about who to nominate, and I wake up today to find out nominations AND battle of the block have been completed overnight.

Seeing as it’s the 4th of July weekend, I should have expected accelerated results, but wow.

First, to nominations. Becky was still pretty upset that Audrey floated around rumors about her being a racist and bigot, so it was no surprise she was going to be her target. The only question she had was whether or not to backdoor her or just put her up from the start.   Her answer?  Backdoor.  Becky found an immediate pawn volunteer in Jason, and then told Steve he was going to be the 2nd pawn (poor Steve). This means…

Shelli, on the other hand, had a different approach to the week. She decided it was in her best interest (see: Clay’s best interest) to keep Audrey for numbers, and vote out someone else. The reason being is that Shelli and Clay knew their place, which was near the bottom of an 8 or so person alliance.  Their thinking is that they can probably get Jason on board with them, but not if Da’Vonne is still in the house, so there was Shelli’s target.  While I understand the idea of keeping Audrey (because Audrey was not going after Shelli), Da’Vonne being a target is kind of a head scratcher. Another weird move was deciding to give Da’Vonne two chances to save herself with no real good backup option if she does.

John was on board with the plan, even to throw the botb competition, but this whole thing really smells bad. Even if Da’Vonne doesn’t win PoV, the votes are still already pretty close to risk it. If Austin does indeed stay on board, that does pretty much guarantee 3 votes (him, Liz and Vanessa), plus she has Clay and probably Audrey.  The rest are up in the air. Shelli is close with Jackie, so she may have her vote as well, and the whole plan could work, but it’s just risky.

Moving on, battle of the block competition…

Needless to say, it was a very late night in the BB house, and they’re just now getting some sleep, but I fully expect PoV competition and possibly meeting to be held today.  If not the meeting, than definitely the competition.  I can still see them saving the PoV meeting for Sunday/Monday, as it’s not that imperative they get that in before the holiday.

What do you think?  Was this a good or bad move on Shelli’s part?