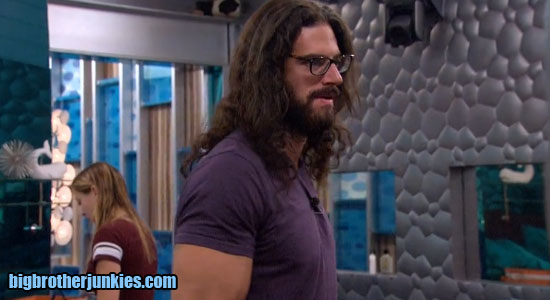 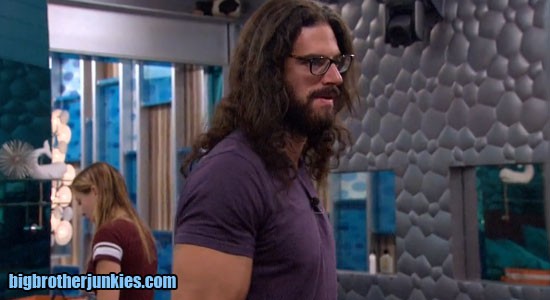 Good morning, Junkies.  As most of you know, the feeds were supposed to be down for 14 hours yesterday, but they were actually down for 16! Weee. I’m glad I didn’t stay awake until 3am to find out the results, because I would have been extremely disappointed.  Not just because the feeds did not come back up for 2  hours later, but because nothing really seemed to happen.

When they announced the feeds being down for so long, most people expected they were simply going to rush the house through a week of stuff to prepare for Monday’s taped eviction (which will air on Tuesday).  I thought the feeds were going to come back up with Vanessa freaking out about something, the nominations set for the week and madness going on (haha, who am I kidding? That stuff only happened the first 3-4 weeks of the season).

Instead, I am putting the pieces together that the only thing that took place were nominations (Steve and John), and Liz took Vanessa out of the house for her reward (or punishment, depending on how you look at it). Apparently the ‘luxury comp’ was a trip to the Ariana Grande concert with none other than Frankie Grande.  I seriously think if I won that reward, I would instantly play sick and see if someone else could go in my place. An evening hanging out with Frankie is bad enough, but to see Ariana?  No thanks. (Sorry, Ariana fans)

Back to the game.  Why Steve and John?  I haven’t quite put that together yet, but I assume it means Vanessa took Liz and Austin’s word seriously that they’d throw the first round of the final 3 should they make it. I actually think getting Steve out is probably the better game move for Vanessa anyway, seeing as he’s really her biggest competition right now, but if she can actually lock away a deal in the process, she may as well. While Austin and Liz say they won’t actually honor that deal, I don’t buy it. Liz may not, but Austin would, and I am pretty sure Vanessa knows that. I took her ability to read people for granted once, I’m not doing it again.  If she thinks going with the caveman and the dimwit is a good choice, she’s probably right.

John apparently is trying to make his own side deals with the lovebirds, as he offered to throw the PoV competition if they vote to keep him. Pretty tempting offer, and I’d be surprised if they don’t take him up on it.  So, between Steve being Van’s biggest competition, and John offering deals to stay, I’d say right now the only thing keeping Steve in the house this week is if he wins the PoV.   Again, this is all too early to tell considering the feeds only came up a few hours ago, and I was sleeping through that period, but I’ll get a better feel of the house throughout the day, and especially after the veto competition.