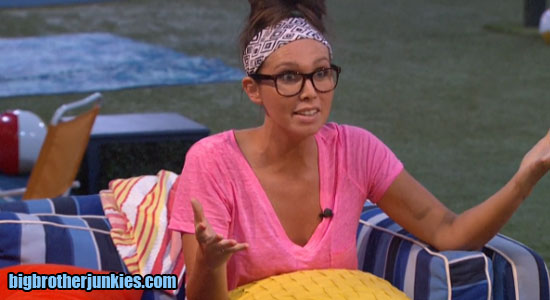 I’m not going to lie, there was a brief point where I felt Audrey had a legitimate shot at winning Big Brother 17. After watching the feeds for a few days, I don’t think she’ll be in the house to see week 3. It is too bad, because between her and Jace, there is endless hours of entertainment available on the feeds. Here is to hoping a new person will spark the action when they’re both gone

Like most recent seasons, the house was generally tame until I went to bed – at 3am. For some reason, recent houseguests have decided to save all the action for 3am their time, and it happened again last night with Jace and Audrey screaming at each other in the back yard.

The thing is, Jace has been walking around the house all week thinking James had this different veto plan, and moments before the ceremony, he was  pulled aside by some mystery person who told him to put up Jace. The reality is, Jace was the replacement name even before Steve won the PoV. He is loud, obnoxious, but worst of all, has the chance to pull of some serious HoH combo strings with Austin (winning back to back to back). Seeing as Austin was saved by the twist this week, this meant Jace was the likely replacement by anyone with a brain.

Naturally, Jace was upset by being nominated, and he’s been spending all week searching for the ‘mole’ who got in James’ ear “moments before the PoV meeting”. He even prayed before bed and apparently had a dream who it was, and said god put it in his dream and told him the truth. I had a feeling his dream was about Austin, but that never really materialized. Not like it matters because we know Austin was not any mole, and it wouldn’t have gone very far had Jace confronted him.

Throughout Jace’s search, pretty much anyone in the house came up as a possible suspect, and someone like Audrey more times than others. Audrey has been playing the game very hard and very fast, so that’s understandable. Well, every time Audrey heard her name come up, she decided to pull the person aside, confront them about it and try to get to the bottom of it. That strategy has left Audrey in a pretty shitty position to the point of Jeff openly walking around last night telling people they need to gun for Audrey next eviction.

This all ended up with Jace and Audrey sitting outside last night around 3:25am when Audrey finally told him the truth that he was the target all along, but due to Audrey’s pretty piss poor gameplay this season, he still didn’t believe it.  Yes, ironically, the time Audrey tells the truth, Jace can’t believe it.

It has been a very confusing week so far with the massive amount of he said / she said, but I am finally starting to piece it all together. I fully expect a lot more drama as the week progresses as Jace continues to threaten house meetings, and he is not going to go out quietly. Shit, he’s even trying to work Jeff to vote out Jackie. I don’t think a miracle will happen for Jace, but it will certainly be far more entertaining watching him try than a few season back when that Dave guy quietly faded away in week 1.

As of 8:45am BBT, the house is still sleeping.  They’ll probably have a wakeup call in a hour or two, so I’ll put up a live blogging thread then.