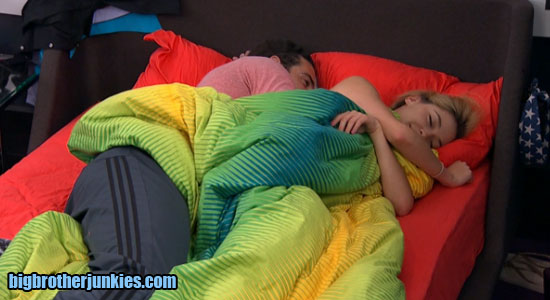 Good afternoon, everyone!  Sorry about the late start, feeling a bit under the weather, so I slept longer than expected.

A quick summary of yesterday…

Vanessa put Clay and Becky on the block because they’re two strong competitors. Jackie put Liz and James up because they’re not.  The plan was for the former to win with ease, be safe from the block and keep Liz up. When the feeds returned, there was an unhappy looking Clay, so we instantly knew what happened. Based on everything I’ve heard, Liz essentially had to carry James through the competition, so I’m sure the CBS episode will play it up like they did when Caleb threw it and Frankie won it alone. (The difference is, James wasn’t AS obvious.. close, though)

When you look at it that way, it’s almost better that Liz won because her odds to play and win shrunk tremendously. I think. My statistics professor would be upset with me over this. Had she been on the block, her chances were 1:6 that she’d win and save herself, which would have been good for the house. Now, there is a 1:10 chance (counting houseguest choice) her name will be draw, and then a 1:6 chance she could win, which would then be bad.  (Note: the 1:10 changes every draw).   Perhaps someone who is much smarter in statistics can calculate her odds of playing and winning now that she’s off the block.

Enough rambling. If Austin or Liz win the POV today, the plan is foiled. Anything else, and Austin will probably walk out the door.

Quick Plug: Almost LA time (I hope I’m feeling better). If you’d like to donate to help out, I’d appreciate it. I explain more on my donate page.