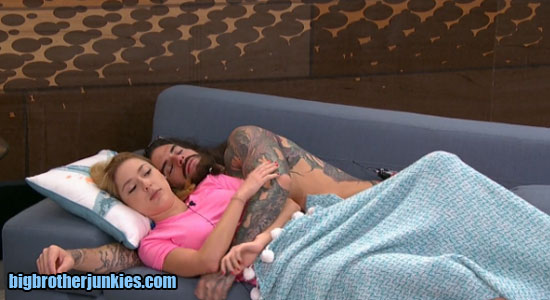 If the Big Brother season was like rounding the bases, I’d say tonight would be hitting third base. While there will still be 8 people in the house after the eviction, there will be no more thoughts on returning players. No more speculation on whether or not BBTakeover will mysteriously come back. And, with about 3 weeks to evict 5 people, the rest of the season is going to go by pretty quick… unless of course Liz and Austin keep swapping HoH and we spend the rest of the season watching them in bed together.  Kill me if that happens.

Anyway, tonight is the night when Shelli, Becky, Jackie and John (or Steve) compete to see who will be the next person evicted from the house. Once John leaves the house, this pretty much eliminates any shot at a wild final month of the season.  Had John remained and someone like Jackie re-joined, that could have essentially been Jackie, John, James, and Meg versus Liz, Julia and Vanessa tonight. That would have made for a pretty exciting finish, but unfortunately that ship will sail because the returning player won’t give anyone the numbers needed to prevent some type of combo of Austin/Liz/Julia/Vanessa making up most of the final 3.

Enough rambling, here are the updates: