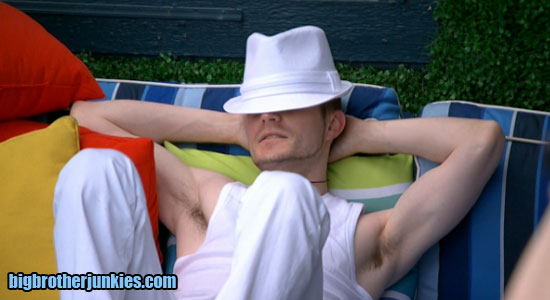 Note – As I pointed out yesterday, I won’t be doing the live updates today (as well as yesterday). Things will return back to normal late tomorrow afternoon when I return home.

I guess it’s a good thing I decided to visit my parents for a few days this week because the house already seems to be locked and ready for Thursday. Barring some miraculous change, the nominations will remain the same, and one of two really good people will be going to jury this week. Granted, they’ll likely be given a chance to come back next Thursday night (they always seem to have the come-back competition with 4 people), but I also think Jackie is really nice, so this eliminates a chance for both Jackie and Becky or John to be in the house together.  (Though, the way the season is going, Shelli will return with a check made out to Vanessa for $500k)

I mentioned it before, and I’ll mention it again. As a Big Brother fan, I do have favorites. As a blogger, my favorite is just drama. Unfortunately for the blogger and the fan side, it’s a bad week for both. Even when John and Becky remain on the block, I don’t expect much drama. And, it also means one of them is leaving. But, the reality is, only one person can win the game, although my ‘favorites’ are being eliminated from that possibility every week.

While I do have favorites, I want to point out that the rest of the cast is still decent. The twins are nice, as long as you have them on mute. Steve is a weird dude, but a likable guy. Austin is… well, Austin. Vanessa may be neurotic, but she’s damn good at the game and definitely the favorite to win.

I’m rambling. I guess that happens when there is little to talk about. That means I’ll wrap it up by saying – don’t expect much to happen today. The veto likely won’t be used and then John will probably go to sleep and Becky will just hang around mildly campaigning.  I could be wrong, but I doubt it.

I will update at some point about the veto, but it may be later tonight. Thank you for your patience over this unexpected trip to the parents.