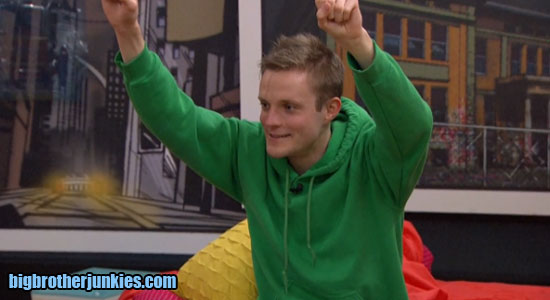 If you missed the update from yesterday inside the Big Brother house, the nominations and battle of the block were completed. Vanessa nominated James and John while Austin nominated Jason and Meg.  John threw the competition, but from the sounds of it, James did so poorly that he was either throwing it as well for some reason, or they would have lost anyway.

This left Vanessa as HoH for the week, and Austin able to compete again this week. This also leaves Vanessa in a pretty awkward spot should either James, John or even she wins the PoV.

Everyone is still kind of going on the assumption that this is all just a big ploy to backdoor Audrey. Should James win, the shit is going to hit the fan because he will definitely take himself off, and Vanessa will be forced to show her cards (I use poker terms with her a lot, if you can tell). If John wins, they may be able to convince him to not use it, but then they’d have to figure out a believable reason why he wouldn’t use it. Basically, there is probably a 98% chance John uses the PoV if he wins it.

Should Vanessa win it, she’ll have to come up with a reason why she doesn’t want to use it, and again, the house will realize that Audrey is not a target and the house will quickly become divided.  While today’s PoV competition doesn’t mean much in the grand scheme of the week (either James or Jeff will be going home), it will mean a lot for drama purposes.  Vanessa doesn’t want the PoV being used, but it’s purely for drama purposes.

So, let’s get to the feed updates: