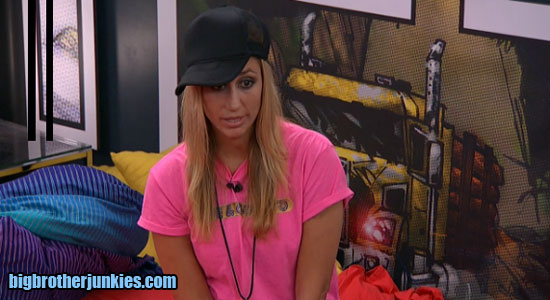 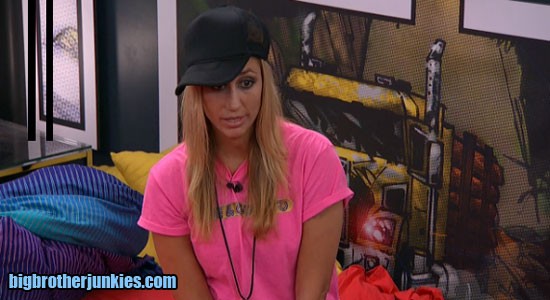 If you enjoy watching Vanessa run around like a chicken with her head cut off during her time in power, I have bad news for you. You’re going to miss it this week. Despite giving us a refreshing taste of the craziness we were set to endure, a message scrolled over the live feeds last night stating that the feeds are going to be down from 9:45am-11:30pm today (12:45p-2:30a est). This is because of the ‘surprise’ eviction on Tuesday, they’re going to just speed the week up into one day.  I will say, it’s nice of them to actually tell this to us rather than have feeders sit around with their thumbs up their bums for 14 hours.

What does this mean?  No feed updates today. I’ll also likely be sleeping when the feeds return, so I’ll post something tomorrow on who was nominated, won POV, etc. That should all be revealed before the feeds are (possibly) cut again for the show.

Back to last night. Once Vanessa won the HoH (Liz won the luxury comp), she was immediately scrambling to see who she can target. Right now she has two sides of the house who both think Vanessa is with them. While she may end up nominating one person from each side to keep the peace as long as possible, the reality is there is no avoiding it this week.  There are only 2 votes, and Vanessa is the tiebreaker. She either splits the house and forces each side to cast a vote for their partner, but then she is the deciding vote.  Her other option is to put one side up and hope for no veto win. This means the other side will be forced to do the dirty work, but she’ll still be responsible for the nominations.

While Vanessa will eventually spin whatever she does as ‘out of her hands’, anyone with half a brain knows she has all the power this week. The person leaving the house will be fully because of Vanessa’s bloody hands, so her best strategy at this point would probably be to accept that reality and try to eliminate someone who will respect the game move (Austin, Steve, maybe John) rather than be bitter and cry (Liz). Does this mean Liz should make it to the end?  No, it just means if Vanessa wants jury votes, she has to have someone else get rid of her.  Liz and Julia are going to vote with emotion, so she’s probably the only one who should be safe this week.

Am I making sense? Probably not.

It’s going to be a long 24 hours, so talk among yourself and try to guess what will happen. As I said, no feed updates today, so enjoy your Friday and check in tomorrow to see what happened in the house!

edit – I forgot to add. Vanessa gave Austin and Liz another hilarious proposal. If she keep them, and they make the final 3, both of them will throw the first round of the final HoH to her. hahahhahaha… Vanessa is smart enough to know that will never happen. Right?  Well, she did keep Liz because of their fake promises…. only time will tell