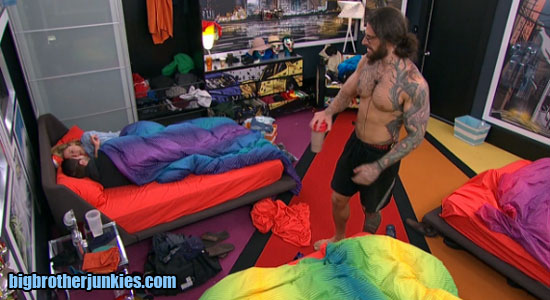 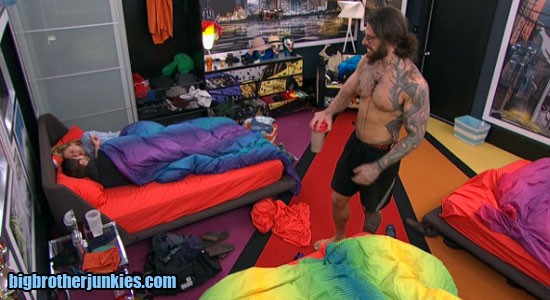 Every season on Big Brother, there are showmances, and then there are creepmances. It looks like Austin is about to turn into this season’s Caleb as his feelings for Liz grow, while her interest in him diminishes.

I’d bet relationship/love counselors analyze seasons of Big Brother because it’s always so fascinating how it works. When people enter the house, those who are single always do the initial flirting, like expected. I mean Big Brother 13’s Keith will forever be remembered as a walking erection when he was dropped into a house surrounded by beautiful women (I still hear houseguests talk about Cassi).

By the end of each season, people are generally at the point where showmances have either happened or they haven’t. Girls like Porsche go from wearing sexy outfits to living in sweatpants by the end.  Guys who lift like every day are barely seen by the weights. I mean it makes sense, they’re so close to the prize, that should be their focus.

However, sandwiched between the caring and the not caring is the beautifully awkward stage where people have gone weeks without being intimate with anyone, hormones start raging, there are still quite a few options available, and the players act more like high school kids than 20-30 year olds. That is where we are now, and it is hilarious to me.

I have mentioned a few times now how Austin has been growing a thing for Liz, despite saying in his episode 1 interview that he had a girlfriend and wasn’t looking for anything like that. Vanessa, clearly being incredibly bored, has not helped the situation as she has tried to play matchmaker between the two.  In fact, last night around 7:50, she was encouraging Austin to try and get a kiss from Liz last night. Seriously.  I can’t even get into how strategically awful that is,  otherwise this blog post would go on forever.

The big thing happened at 6:43pm when Liz and Jeff were laying pretty damn close in bed when Austin walks in. He looks at the bed, clearly appears stunned and says “what’s going on in here?”. Liz shrugs it off and says they’re talking as he mumbles something on the way out. This set Austin into this serious panic mode where it became absolutely imperative the clearly screwed Jeff becomes the definitely clearly screwed Jeff. He went to anyone who would listen and ranted about how he’s worried that Jeff may stay. Austin tossed around the idea of changing the deal he had with Johnny Mack that was just safety for throwing the comp to safety for throwing the comp AND voting out Jeff.

I have a feeling today is going to be interesting on a psychological level with the feeds. Austin and Vanessa were sitting pretty at the top of the house with Clay and Shelli. A pretty tight, strong 4 people with an additional 2 votes with Liz and her sister. Will Austin’s ‘Calebness’ destroy a nearly guaranteed final 6 position in the house?   I’ll put up a live blog thread going in an hour or two when the house actually starts waking up.