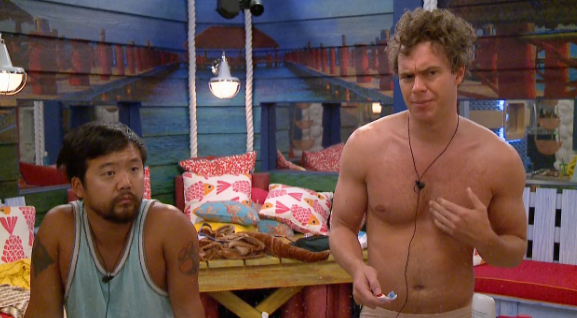 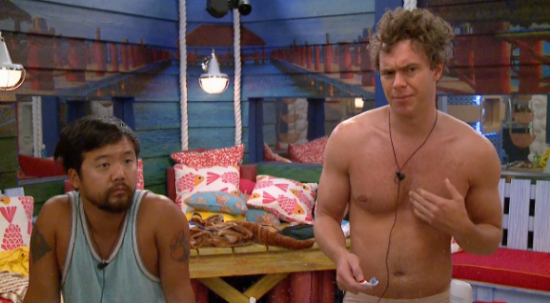 If you missed the little blurb last night, James is up to his old tricks inside the Big Brother house.  During the afternoon, I watched him in the bathroom doing something to the lotion, but then he walked away and nothing came of it. I assumed he was actually doing something normal, but then I forgot that this is James, and his pranks are in it for the long game. He doesn’t need instant gratification when he’s at work. He’ll set up a bunch of traps and just wait for people to fall in them.  Last night around 10:48pm (flashback here), they did. Natalie used the lotion and put it pretty much all over her body, but then Bronte took the same lotion into the shower and within seconds realized it wasn’t normal. It felt weird and oily to her, and she instantly realized there was mayonnaise inside the bottle. Did did a crazy banshee call to yell at James, and in the process, the camera for some reason showed the shower from the top down, and it showed Bronte’s chest. Talk about adding insult to injury.

On a side note – I don’t know what to think about Natalie putting an oily, slippery product like mayo all over her body without realizing something was up.

Now to some of the likely slow afternoon updates:

I am going to be closing this thread so I can take a dinner break, etc. I will start a new thread in an hour or so.  Thanks for reading today!