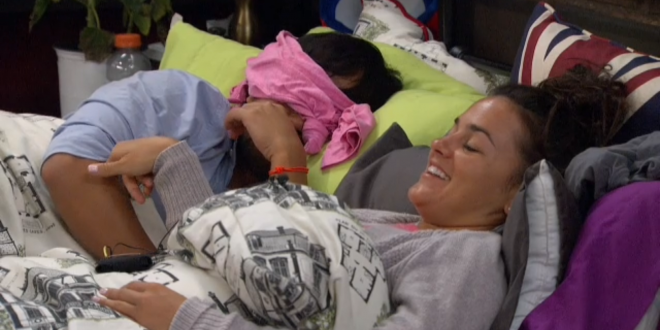 Good evening/morning!  I want to start by addressing some of the comments about the overnight recaps.  First, I am the new overnight blogger and I appreciate both the positive comments and constructive criticisms.  I am still acclimating to how much or how little to post.  I tend to get wordy and caught up in exactly what is said, which tends to slow me down and puts me behind.  On the other hand, I didn’t necessarily like the way I broke it down by room last night.  Second, I posted overnight on Saturday morning, Monday morning & this morning and each had it’s own issues.  Last night, half the house was asleep by 10:15BBT and the other half was engaged in incredibly dull chit-chat, except when Paulie told Corey & Nicole to be careful with Paul.  There was no real game play conversation except that.  All that being said, I ask a little more indulgence while I find that happy medium that satisfies as many folks as possible.  I’ll get better, I promise!

I think it’s going to be another exciting night in BB land!  As of now, Vic, Paul, & Michelle are in the Safari room.  The rest of the crew is crashed in the London room…or at least they were!  BIG Corey/Nicole convo going on now….let me listen and then I’ll share!  I’ve shared and it’s quite a bit.

Check out the P&P 2.0 convo highlights that start around 3:30 a.m.  Some very interestng stuff there.