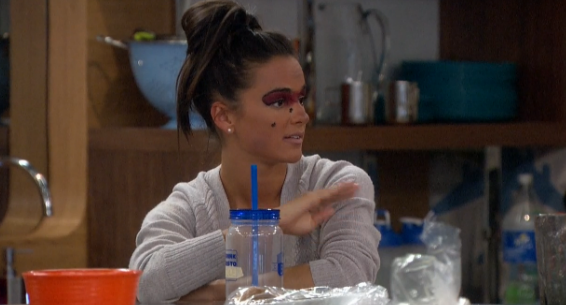 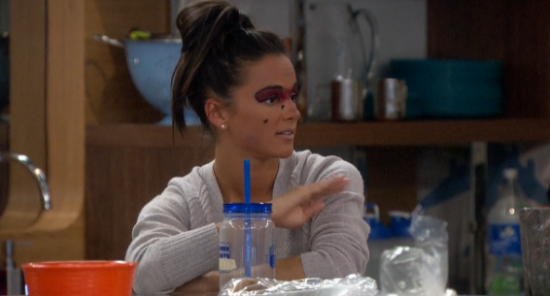 Seeing as this is the first live eviction week of the Big Brother 18 season, I wanted to let people know what happens on Thursdays both on this site and in the house. Not much.

Ok, I can elaborate on that a little. First, in the house, most of the people spend the day getting ready for the live show. Between getting dressed and looking pretty, production jumps in a lot and gives them instructions for a walk-through of the evening. Plus, the cast is usually locked in the HoH room for about 2 hours while people enter the house and make sure things are all ready for the show. A lot goes into producing an actual live episode, and it’s hard enough when you exclude the feeds. To prevent us from watching production crew running around the house as quick as possible, feeds usually just show the fish tank most of the afternoon. Occasionally feeds will come back for a few hours before the episode, but there is usually no game talk as nerves are high and plans are set.

That means on the site, it’s generally an afternoon off. There have been times I’ve put live update threads during the rare time drama happened on Thursday, but if you don’t see an update thread, it’s because it’s just a normal Thursday in the house. Nothing to report. I’ll post my predictions for the night, maybe toss out some plugs (sign up to the live feeds here), but other than that, it’s my time to catch up on DVR’d shows or actually leave the house! Just kidding, I still don’t leave the house.

Time for some quick predictions….

Jozea is gone. His little newbie crew has been so insanely naive this first week, it is embarrassing to watch as a fan of the show. I get that most of the newbies are models who have been recruited and are trying to further their careers, but their complete lack of awareness is shocking, even for newbies.  The crew (made up mostly of Jozea, Victor, Paul, Natalie, Bronte, and Bridgette) completely failed to put pieces together that the veterans are not just sitting there doing nothing. I believe it was Paul who said there was no way the vets could have come up with a plan to use Paulie as a pawn in just 2 days. Yes, he said 2 days…and believed it. Little does he know, smart Big Brother players can come up with plans (and have had to during double evictions) in 15 minutes. 2 days is a lifetime to come up with a basic plan of using a person as a pawn. That is Big Brother 101 stuff.

To top it off, the person who would have been stereotyped as the ‘airhead’ has been the only one remotely aware of the situation in the house. Natalie has mentioned numerous times how strange it is that the vets seem overly confident. How Paulie isn’t really trying for votes. How there is a very good chance Jozea will actually go home this week. Whenever she brings it up, she is quickly dismissed with some ridiculous reasoning by Paul or Jozea on how that just can’t be possible. To be fair, Bronte has piggybacked on Natalie’s thinking, but she is still a bit in denial about it all. While Natalie seems to be like 80% sure something funky will happen tonight, Bronte is at around 25% while the rest of the newbies are around 10%.

I had to mention this because Natalie will probably be portrayed as the pretty one who just had showmance drama with Victor, but she has been the smartest player out of that bunch. It’s just too bad they all worship Jozziah (ty Amy) instead of listening to reason. You may not last very long in the game, but you deserved better, Natalie.

Tune in tonight to see if I’m right!