Big Brother 19 – Let’s Talk About Paul For A Minute 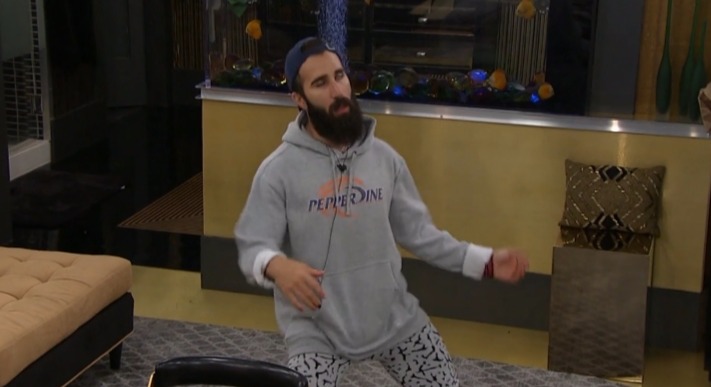 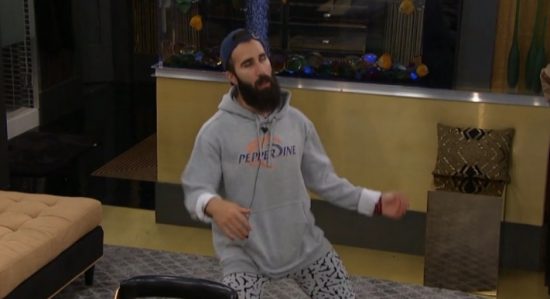 A few weeks ago, I compared Paul’s early game to that of Boston Rob from Survivor during the season he won (Redemption Island?).  It’s no secret that Paul was in full control over the house back then, and still is to this day.  Not a lot has changed since my original post other than him scooping up the loyalty of two more women in the house (Raven and Elena) which once again fits with the Rob strategy where he had about 3-4 loyal female soldiers around him.  Paul is sticking to that blueprint, and it’s working really well for him.

The reason I post this today is because of what I watched during the fighting between Jessica/Cody and Josh yesterday afternoon.  Lost in a lot of it was the way Paul handled the entire situation.  Let’s look at it from his perspective to see what I mean.  Sometime in the afternoon, Paul was sitting outside doing his thing when Josh came out to vent about Jess taking the spelling shot at him. As he was venting, Paul subtly suggested that Josh go in and return the favor by asking her to spell ‘evicted’ to which Josh happily obliged and ran in to keep the fight going. While some may look at it as Paul just jumping into the fray, to me it looked like he quickly took control over that so he could use it to his advantage.  He knew Josh would run back in and continue fighting which does nothing but make potential jury members look down on the people fighting (Josh, Jess, and Cody).

He is building Josh up to be the punching bag while he comes out looking like a puppet master if they’re both sitting in the final 2 together (which I believe is Paul’s ultimate goal – sitting with Josh).

Now, I’m not here to talk about the obvious of Paul using Josh as a puppet. We all knew that last week when he told Josh to ‘crank it up to a 30’ and encouraged the pots and pans. He is having Josh do the dirty work for the sole reason of making everyone hate the guy so he gets less jury votes.

The big move from Paul came yesterday when Josh was finished fighting and went up into his HoH room to break down. Paul immediately went up there and pumped him right back up by saying Josh did nothing wrong and the other two look like complete assholes. He said he was proud of Josh for standing up for himself and thinks Josh should be proud as well. This wasn’t encouragement to make his friend feel better. It was to keep Josh fired up and not scared to retaliate to any form of drama.  In addition to keeping Josh fired up, he also set the narrative that Josh was upset because Cody called him fat during the argument. While Josh insists he was crying because Cody confirmed that he talks shit about Josh in the DR which must be killing his parents, Paul stuck to the ‘fat shaming’ aspect of the argument and pushed that narrative to where everyone ignored Josh and listened to Paul.

When that narrative was set, Paul decided to shift some focus off of Cody (who is dead in the water already) and put some on his target after Cody – Mark. He blamed Mark for not going in there and defending Josh for being fat shamed. Why he did that may seem random, but this is because Mark has been very open about being anti-bullying – especially against weight. Mark was bullied as a kid for his weight and that is his most sensitive issue. Despite Mark looking on from across the house and not being involved at all, Paul said it was a shitty thing for Mark to remain quiet.  This attack proved to be a success minutes later as Mark tried to come into the room to check on Josh and was immediately kicked out like he was part of the problem.

If that wasn’t enough, Paul wanted to put the exclamation point on the Mark focus later on as a large group was hanging out in the apple room discussing the incident. Paul took that opportunity to once again call Mark out for not stepping in, and a large group got to watch this weird confrontation. Once again, Mark remained confused, but Paul continued to hammer home the point that Mark was bullied and should have stopped the fighting.  After the room cleared, Paul and Mark “cleared things up”, but the damage was done. Paul took the fight between Josh and Jessica/Cody and managed to make Mark look bad.

I’ve seen the question asked numerous times whether or not Paul is playing a great game or the cast is just bad. Watching Paul yesterday showed he is, and always has been, multiple moves ahead of anyone else in this game. To answer that question, I compare it to a Chessmaster who sits in a park beating up on anyone who comes along that day. Most of his opponents are bad, and some may give him a challenge, but in the end, the person is still a Chessmaster. Paul may have some weak competition this season, but he is playing exactly like a Chessmaster would play against a novice opponent.  He is multiple moves ahead and just waiting for the right time to win.

In summary – whether you like the guy or not. Whether you like his game or not. Paul is having a fantastic season and controlling the house far better than many other veterans could do.  Look at some of the recent winners.  Who do you think could control this bunch of bad players as well as Paul has been?

What are your thoughts on it?  Is Paul overrated, or is he playing exactly like a great player would play against a bunch of terrible players?