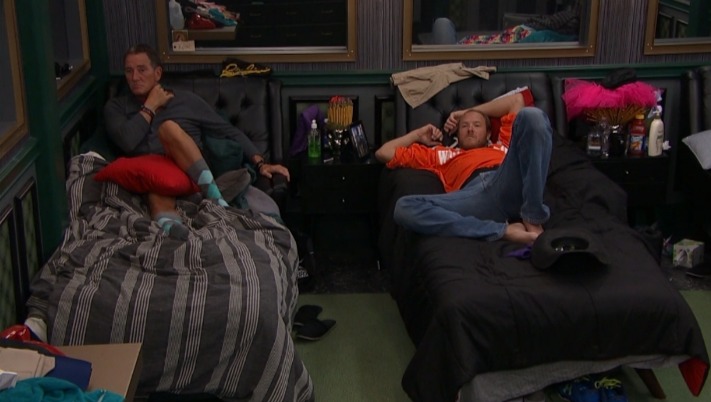 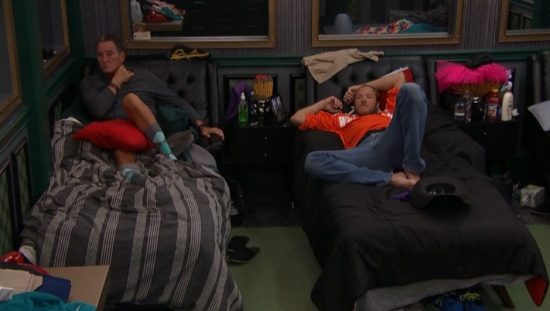 Mark will be out the door tonight and I’ve heard rumblings of an endurance comp (Steve’s note – It’s true. Endurance competition tonight). Speaking of comps I’m still a little miffed they turned the slip and slide into a veto comp that we didn’t get to watch on the feeds. That’s always an hoh comp. Sometimes, I think they stick with tradition on things many of us don’t care about (going to see the hoh room every week) but switch things up that I want left alone. It’s possible that I’m just complaining a lot this season! Being a BB fan and complaining is also a tradition. I’m still seeing stuff pop up about James and/or Caleb making an appearance too. I can’t imagine needing a guest host for an endurance comp. We’ll have to wait and see. Here’s a few highlights from last night.

After Alex and Paul’s conversation with Mark, things seem pretty chill overnight. I thought it was dumb last night to even have an argument with Mark and I still do. It looks like Mark will leave with his head held high and getting a couple of digs in at Paul and Alex as well. They completely dismissed him but I’m glad someone finally pointed out that it seemed mean and personal to bash people who are no longer in the game. I like that Mark has campaigned all week and continued to do it a little bit last night with Alex.

Alex and Mark talked about Elena, the game and where things went wrong for him. She took pleasure in telling Mark the times Elena threw Mark under the bus and it reminded me of Nicole last summer. Remember when Nicole twisted some information and unnecessarily hurt James’ feelings about Natalie?  It felt a little bit like that. There wasn’t a reason for it. Mark wished Alex and Jason well in the game and he seemed very sincere.

Christmas has kept her spirits up but got a little depressed last night, she even cried a little in the hoh room alone. She snapped out of it and started studying the days. She’s really getting frustrated with her foot injury and how limited she is. She made a comment about thinking that she would be walking on it by now. She’s kept her spirits up better than I could have, maintained enough spunk to be mean to people and has a really positive attitude towards the whole thing. I have some complaints with Christmas but her attitude towards her injury and recovery aren’t one of them. (I’m sure the meds have helped her positive attitude as much as her determination) she is mad because she thinks Elena took a couple pair of expensive pants the belong to Christmas to the jury house. Josh and Christmas also talked about how Matt probably won’t want a relationship with Raven when the show’s over and how Josh thinks they really need Paul and Raven with them in the final four.

Raven had to lay down with a stomach ache which made the rest of the house quieter for a while. She had a little talk with the camera about other people with GP and what she was going through. She was saying things like “who would I be if I wasn’t sick?” The camera switched off of her at some point so she didn’t have an audience for some of her monologue. Later, Alex asked Matt if Raven was feeling okay and Matt said she was faking. (He was joking but he says things like that all the time and it’s funny)

Paul talked about the cast of season 18 and what they were up to now. He said most of them went back to their regular lives and  talked about the experiences some people have once the show is over. He said he’s never met Dick or Daniele and knows that people who had a bad experience like to put it behind them and not think about BB again. He mentioned how others are still trying to milk their 15 minutes of fame years later. I thought this conversation was funny timing because of the James rumor. Paul also talked about being on Bold & Beautiful and another show he said he couldn’t talk about. He must not realize Candy Crush has already aired not that anyone cares. (that’s actually a slam at Candy Crush rather than Paul this time)

We’ve seen Kevin feeling a shift in the house lately and he and Jason talked about it last night. Kevin is upset that Alex and Paul have been questioning him & he doesn’t understand why.  Jason told Kevin that maybe they’re trying to get him to crack. Kevin questioned it further and Jason decided maybe they’re not.  Of everything going on in the house, I’m most curious about this situation. Jason goes along with Paul and Alex and in moments where they get him really fired up, he seems to buy into it and believe them. Once he’s alone, he always reverts back to wanting Kevin to stay and trusting him. They also talked about Matt and Raven being the next targets but those two always talk about that. Kevin also talked about someone he knows who spent 35 years in prison for a crime they didn’t commit. I know that’s not related to anything else I’m updating but we’ve already established how obsessed I am with this subject.

I’m sure I’m leaving out some minor conversations from last night but I have a crazy day at work today and have to take off soon. Steve will be giving you the eviction day post later today anyway and that’s the important one. The upcoming week could be another boring one but depending on what happens, this could also be the week that a couple of people have to show their cards. I’ll be here this evening to see if there’s any excitement and as usual, give you my weekly thumbs up or down regarding Julie’s outfit.