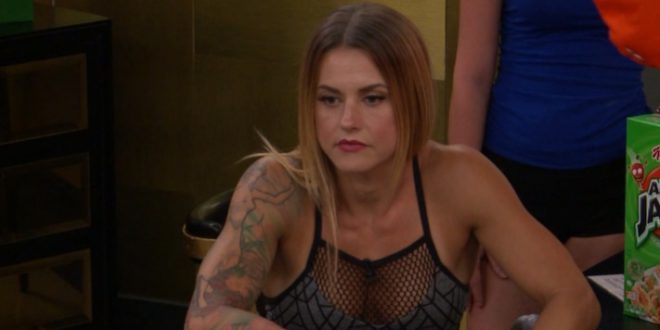 Christmas through all the fun today

I have to put it out there… I’m done with Jess and Cody.  By ‘done’, I’m not referring to being a fan or not (I don’t like anyone!). What I mean is that there really is no hope for them and they’re at the point of just wasting our time like everyone else. I was pulling for Cody to return to the house because I felt he was the only one who would challenge the big group and stir the pot. Nope. He’s been a complete dud since returning and just spends most of his time attached to Jessica.  We would have been better off with Cameron or Dom returning than Cody, but can’t change that now.  As far as Jessica, she has potential to stir things if Cody leaves, so I’m going to be rooting for her to win safety this week to prevent her from getting the boot. Overall, the best thing moving forward is for Cody to leave and Jessica to seek vengeance.

That brings us to today where we have nominations and the temptation competition. The entire house (minus Christmas) is planning on playing in the competition to ensure one of them wins and one loses (a pawn). Last I heard, only Cody plans to play because those two didn’t want to risk a situation of one winning and one losing. Little do they know, Paul would rather a pawn lose because it would be better for Cody/Jess to be regular nominees than the 3rd nom (and don’t get me wrong, this is Paul’s HoH)

Regarding updates, I am shooting up to my parents at some point this weekend, so you guys will have to self-update in the comment section again.  I am not sure if that will be tonight or tomorrow yet, but I’ll keep you updated on that.

So that’s where we stand. The week of Josh has begun. What will he do?  Whatever Paul wants him to do. I have a suspicious that Paul is going to want to overthink the week once again so he can make a big splash come Thursday night.  I’ve come to the conclusion that he’s playing the game to be recognized as the best player in history and is going to keep doing what he considers big move after big move.  Early indications are a backdoor attempt at Jessica because there is nothing better than kicking someone while they’re down.