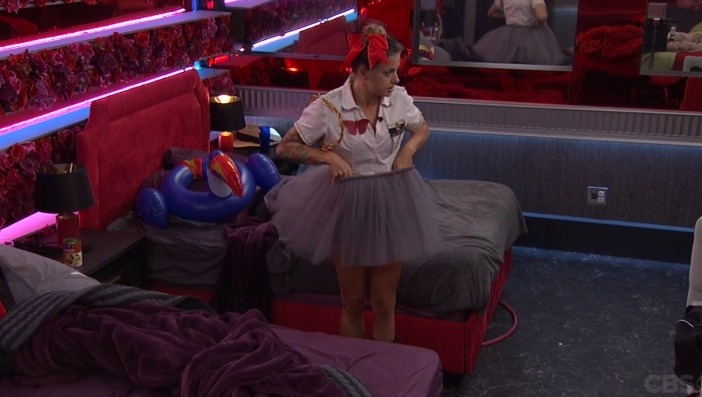 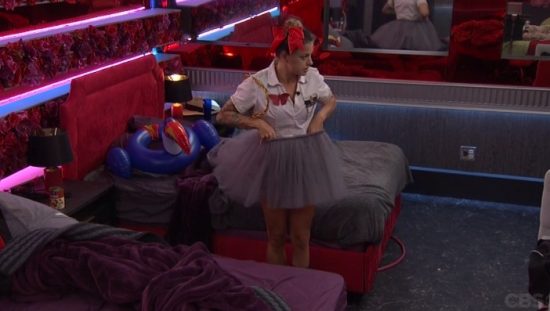 I brought this up in one of my recent posts, but the site issues have had me distracted to further talk about it. So, crossing my fingers they’re gone (site issues), let’s talk about Christmas a little

With Kevin holding no power tonight, there is about a 99.78% chance he’ll be evicted and the final three will consist of Paul, Josh, and Christmas. Let that sink in for a minute….

Done?  Ok, now on to the situation.  During the episode last night, one part really stuck out for me and that was production not clearing Christmas to play in the comic book challenge. Why this is a big deal is because she did clear her for play in the running HoH competition despite clearly not being able to run.  She could hop, but odds are she was going to lose that competition unless every single person faulted and threw the comp to her… oh, wait.

Why did they not clear her for the comic book challenge?  Obviously, she can’t hang on to that wire thing and risk falling on her bad foot so they removed the temptation to even try and didn’t make her sit around for 45 minutes to time out (like they did for Kryssie during the wall challenge last fall when she “injured” herself and gave up). Wouldn’t the same be said about the running competition? Wouldn’t she have also been tempted to just use her bad foot and run against doctors orders?  There is no way a doctor actually cleared her to run as she can still barely walk without crutches.

The reason why this is important is because of what happens tonight. If history repeats itself – and it should – the trio would traditionally play in some type of endurance competition tonight in the first of three rounds of competition.  The big questions will be will they clear her to even try, and if they do, will they change the endurance competition to something she can actually participate in?  Like standing there holding a key for example (minus water being sprayed on them). While it makes sense to change it up for her because it would be weird to have a two person endurance challenge knowing Christmas is almost certain to sit out round 2 as that is typically even more physical than round 1.

It basically boils down to production either changing the comps and pretending they had these one-legged comps already planned, or they do nothing tonight and disqualify Christmas from competing in the first two rounds of competition which will automatically send Josh and Paul to the final round. A third and more likely option is to awkwardly go through with whatever they had planned and make everyone waste their time building an elaborate challenge just so Christmas can sit out and Josh can fall 30 minutes into it.

What do you think they’ll end up doing about her situation?  Should they go against their word and make the challenges easier despite already going out of their way to allow her to remain in the game? I mean Big Brother is not only about competing against others, it’s about competing against yourself and trying to remain sane despite being isolated for 3 months. Even if CBS secured her exit to prevent anyone from spilling any secrets, she was already given much more outside human interaction than anyone else, a break from the game, and drugs! They put themselves in a tough spot by allowing her to remain in the game, and that move was kind of forced on them by the pressure of potentially losing three people during the first HoH (Megan, Christmas, and the first evicted player).

I’m back to rambling. Tune in tonight to see what they decide to do. It should certainly be interesting to say the least.