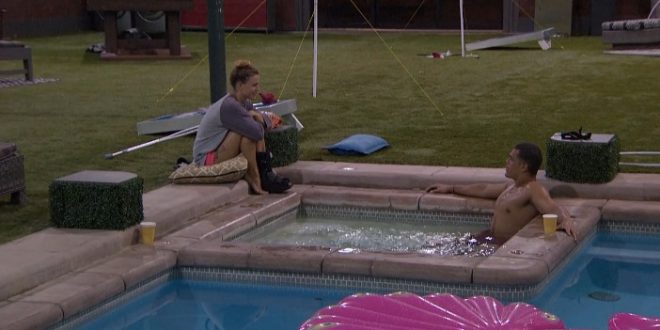 Remember when Christmas yelled at Kevin for asking if she was going in the pool? This is obviously what he meant

Today may be a little eventful even before the DE if Josh tells Jason that he’s voting him out early in the day.  Paul wants Josh to tell him right as they sit down on the sofas before the show starts. Josh isn’t bothered by taking Jason out but he doesn’t agree with Paul about how they’re going about it. Regardless of how today unfolds, we still have a DE to look forward to.  I was glad to see a new comp last night. The look on Paul’s face was funny because it looked like someone trying to fake being happy.  Paul has gotten used to being familiar with the comps. Alex is an idiot and normally I would say trying to win is the smart thing to do but not in this case since she’s so far up Paul’s butt. She completely trusts Paul so him winning the veto was best case scenario since it made all three of them safe. She wasn’t trying to win because she didn’t trust him,  she just couldn’t remember the plan. (unless that was editing which is possible) Here’s some talk from last night: