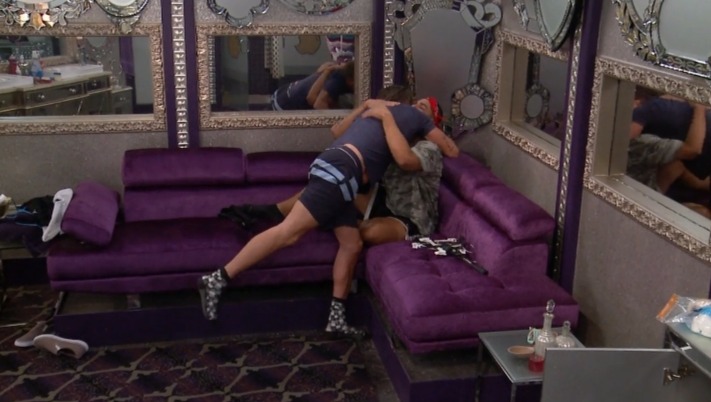 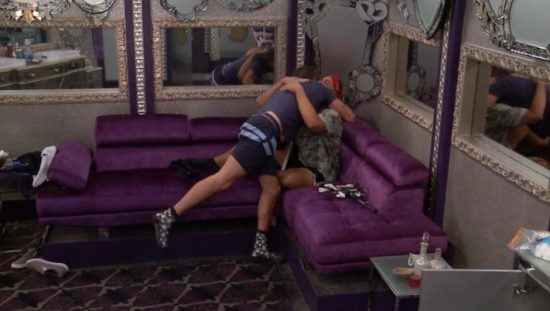 Well, that was a wild day in the house. I remember earlier in the season when Paul was talking about how great this cast was, how they all got along so well, how nobody was as mean as the people during his season, Blah blah blah. When he said that, I thought back to a conversation Frank had with Bridgette that stuck out to me. He told her about life after the show in a more realistic tone rather than the bullshit Paul feeds these newbies. He said that the reality is only a few people are going to talk to each other. They’ll be friendly and stuff in public, but there won’t be any big group gatherings or anything crazy like that. At most you’ll keep in constant touch with maybe 1-2 people and casual talk with a handful of others. I’m not sure why that stuck out with me. Probably because I assumed these people who say they’re going to do all this fun stuff end up traveling around together following the show. Looking back to Paul’s talk and seeing how bad people hate each other now it just shows once again how Frank was one of those rare honest and genuinely likable people we were fortunate to see twice on this show. Kind of a random thought, moving on…

Today had some wild ups and downs for people including some late breaking stuff I’ll get to in a minute. It was a relatively calm morning in the house with Jason feeding Raven whatever she wanted to hear in order to keep her happy. Feeds went down for the veto meeting and when they returned, hell had broken out. The reason is due to Jason not using the veto which seals the fate of either Matt or Raven (it will be Matt). If you want to watch it all play out, load up the feeds and flashback to 12:00 pm and enjoy the show.

Just kidding!  Not in this crazy house.

The afternoon fight revolved around an unusually angry Matt who insisted he wasn’t angry and insisted he didn’t mind the game move, but really hated the fact that Jason went to the storage room for 10 minutes at the end of the veto meeting to delay the inevitable fight that was about to happen. He told Jason that he (J) is going to feel stupid and embarrassed for whispering in Raven’s ear that he’s going to pull one of them down after he nominated them the other day. Matt then continues to make a fool out of himself by screaming in this crazy voice and also basically tossing in the towel by declaring he is going to eat whatever he wants this week and not care.  Being a have-not, that all but guarantees a penalty vote if not more but he didn’t care because why would he start now? The ironic part of that Matt argument was that he and Raven were part of the group calling Jessica a ‘really expensive date’ when Cody threw away his game for her. After pouting, he took some Triscuits and Sprite into the DR and got yelled at but still insisted he was going to eat what he wants this week. Stay tuned for that…

Things started to calm down on the RATT (Raven and Matt) side of the fight but Kevin was still able to avoid everything until Christmas asked him if he was jumping in the pool. Apparently, he said yes and asked if she was going to. I’d know more exactly what was said and how it was said if the feeds weren’t so focused on Josh and Paul patting each other on the back for the ugliness of the house. Christmas decided that statement was offensive because she has a broken foot (did anyone know she had one???) but Kevin pointed out how she was hanging out by the pool the other day. That’s all he was asking her but it sounds like he just worded it the way Kevin does.  Again, I can’t confirm the tone because the feeds were on Paul and Josh but he really hasn’t had a problem with her so I don’t see a reason why he would have been malicious with his reply. 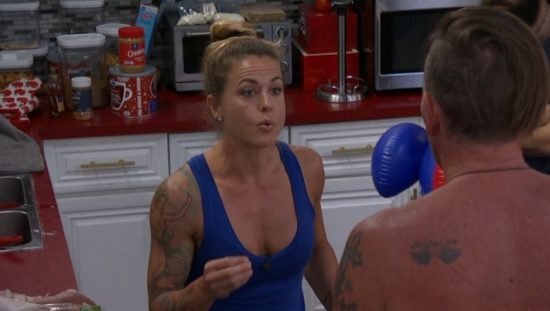 Christmas got her condescending tone that she used really well against Mark and tried to put Kevin in the same position but Kevin was not having any of it and told her she’s making a big deal out of nothing.  He pointed out how she was by the pool the other day and it was a harmless question.  After trying to egg him on some more it was clear that Kevin was able to do what Mark was not – make her feel stupid. Christmas started to calm down and then Josh jumped in to say that he heard Kevin ask that. Kevin pointed out that Christmas asked him first but Josh didn’t hear that, and he made Josh admit he was wrong which I’m sure was quite embarrassing on him.

Josh continued to badger Kevin while Kevin walked away and then brought up the $25k prize that Kevin took early in the season. Josh wanted him to admit that he took it, but Kevin replied that he thinks Josh took it. Josh told him to swear on his kids which was the breaking point for Kevin because he did not want his kids brought into it. He started dropping f bombs left and right and telling Josh he’s going to make him go pout in the DR if he keeps that up. Despite Kevin flipping out, Josh continued to push Kevin who was losing it and swearing again. When Josh called him a liar, Kevin went to grab a cup from the counter like he was going to hit Josh in the head.  The feeds cut for a solid 40 or so minutes and returned with everyone calmed down.

The late breaking stuff was that as I was writing this, I noticed on the feeds that Kevin approached Josh and apologized numerous times and said he’d never hit him. He said to come outside later and they could have a one on one talk to clear things up.  Josh accepted his apology.  The other late breaking story was that this event was shortly after Jason, Paul, Josh, and Alex were sitting around the bathroom talking about Kevin (Timestamp – 3:30 pm).  Josh was clearly upset about the incident with Kevin and actually worried that he put a target on his back. Jason and Paul tried to convince him not to be worried and Jason took it a step further (MUCH too far) and said that if Kevin nominates him, Jason will “make him lose his $40k” (the $25 plus I assume the stipend). He says that he’ll start yelling all types of names to Kevin, and Alex jumps in starts suggesting the swears. Jason says he’ll yell “I’ll fuck your wife when I get out of here, and tie your daughters up to make them watch”. 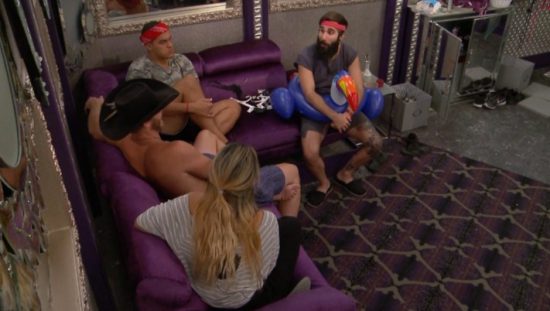 Jason tries to make light of it by saying “where is the line??”.  While Alex is laughing naturally, Paul jokingly said “The line is gone!” and tried to deflect from that comment. Paul was clearly uncomfortable from that comment but nowhere near Josh who just started saying  “ohhh myyy goooddddd” and did not appear to be a fan of that joke.

So let me try to summarize this afternoon….