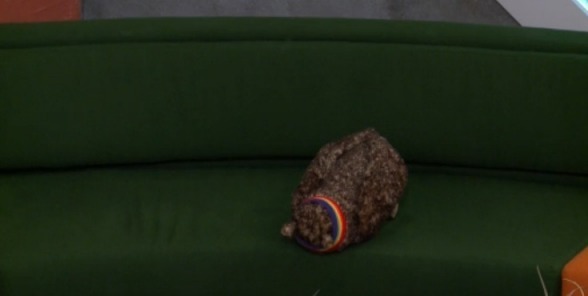 There is literally nothing going on in the Big Brother house today. They were woken up early and the feeds went down for about 3 hours which they likely shot the memory lane episode nobody really cares about. Jeff may have come in the house as well, but I care even less about him than the memory lane episode.

Side note – I’m seriously done with these houseguests they keep forcing on us. Jeff and Rachel are the worst with that. I tweeted today that she is going to be on the next season of The Amazing Race (as most already knew) but I didn’t realize this was her third appearance on that show! That combines with 2 seasons of Big Brother and appearances in BB14, 15, 16, 17, 18, 20, and Celeb BB. That is 5 full chances to win $500k-$1m and 7 guest appearances. She was also on Celeb Fear Factor but that’s a different network.  How does she keep showing up year after year?

Getting sidetracked. That brings me to Tyler and the rest of the final 3 and their odds of winning.  Note – be prepared to see plenty of Tyler on CBS shows in the future. I think he’s going to be the next Jeff.

Tyler won round 1 of the HoH competition which means Kaycee and JC will square off in Round 2. I’d put odds of Kaycee winning around 99.34% so I’m going to write this article like Kaycee already won. Round 2 of the competitions typically require a lot of running and dexterity and nobody in the house can beat Kaycee in those type of competitions right now.

For reference, here are the recent round 2 comps…

Here are the possible scenarios…

Let me break down the Tyler vs Kaycee votes…

The only easy people to decide on were Bayleigh and Angela. Fessy almost certainly would go for Kaycee as well and I think Rockstar would vote Tyler if she were alone in the game but she’ll likely copy her alliance. That is the same reason I can see Haleigh possibly voting Kaycee even though she really wants to vote Tyler. In the end, I think Haleigh sticks with Tyler because she respects the game and him. It will be tough because her alliance will pressure her to screw Tyler but I don’t think she will.

JC is also kind of a wild card because he shares a bond with Kaycee but I really think he has a crush on Tyler. Like a real crush and way more than he even jokes about.

Sam and Brett are also really tough. A week ago, both would be locks for Tyler. However, they are potentials for being upset over Tyler breaking the final 2 word. At the same time, they don’t really seem like bitter people and Sam without a doubt got along better with Tyler throughout the season and Brett bro’d up to Tyler when Winston left.

Kaycee has a ton of recent comp wins, but there is an argument to say she got carried for 3/4 of the season where Tyler basically had to scheme from the beginning. Tyler won the first HoH which put a target on his back and it was uphill from there. While live feeders know that Kaycee was more involved in the discussions than people realize, the jury won’t know that. They’ll just see Kaycee as a really good person who played possum and let Tyler and Angela do the dirty work.

Kaycee won one HoH and got out Haleigh in a very obvious move. She won 5 veto competitions but didn’t use the veto at all.  The ‘blood’ on her hands basically consisted of shooting a fish in a barrel.

Tyler won three HoH competitions and got out Steve (when it was supposed to be Sam but he flipped Kaitlyn), Scottie, and Brett – his ally. He also won the veto three times and used it twice. One of the veto uses was to backdoor Swaggy.

In terms of ‘blood’ and overall getting your hands dirty, Tyler wins by far. As much as Kaycee is a beast, this part of the game is really not even close. The social game is where Kaycee did really well at and not making promises she couldn’t keep. We saw from Paul that players really don’t like that no matter how good they are throughout the season. Kaycee’s social game will make the vote close and really possibly win her the season, but I just don’t think it will be enough to give her the win.

For the record, I do think she would have beaten Angela in the finale.