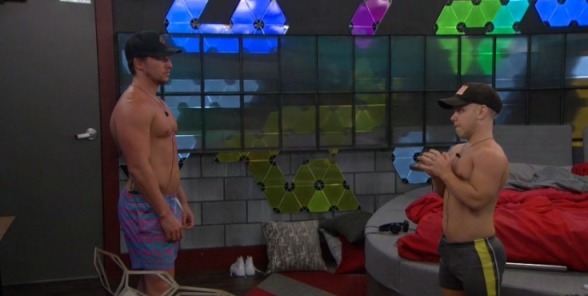 Good morning, everyone!  Mel has the morning off so you’re stuck with my morning recap.

I had a dream last night that I was in the finale with Tyler and Fessy and the final comp was a swimming challenge. Against a lifeguard. Needless to say, I lost. Not cool, dream Big Brother, not cool.

Last night was an insanely slow day in the house – shocker – but there were some bits of game talk scattered throughout the day and especially into the evening, and that game talk is very bad news for Brett moving forward. JC did say that Brett was the next person he planned to get in the head of, and it appears to be working. Gotta give the guy (JC) credit, for what he lacks in a physical game he makes up in a strategic one. 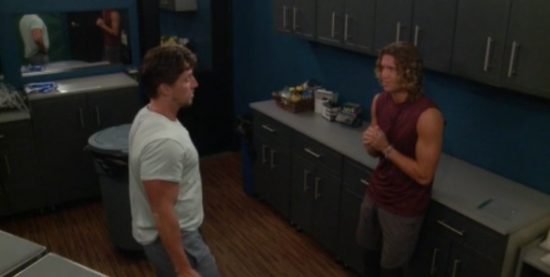 Brett pulled Tyler to the side for a little update on the state of the house and quite possibly sealed his fate as the next person to be evicted after Haleigh leaves the house tomorrow night. This is because they discussed who should be sitting with them in the final 4, and went back and forth on the pros and cons of the girls versus Sam/JC.  While it appeared to be going well for the most part, things took a bad turn when Brett suggested that Angela be the person to be evicted tomorrow night. Tyler agreed of course, but we all knew that he was just leading Brett on because he obviously couldn’t reveal just how close he has become to the girls, and that was apparent later when he met up with Kaycee to re-tell the story.

Kaycee was a bit shocked by Brett’s apprehension about moving forward with the entire L6 and after a bit of talk with Tyler about it, they decided that Brett very well could go up and out tomorrow if there is a replacement nominee needed. With an entire 36ish hours to stew over Brett’s apparent ‘disloyalty’, that very well could change to Brett flat out being the target tomorrow night which wouldn’t be the worst of decisions for the trio. While I like Brett, I like to look at the game from all angles and their smartest move is probably to scrap Brett sooner than later and take their chances with the extremely weak Sam and JC moving forward.

Basically, if the final 5 consists of Angela, Tyler, Kaycee, Sam, and JC, then the remaining L6 members all but guarantee to control who sits in the final 3 because the other two just aren’t winning anything. With Brett potentially wanting to flip and get Angela out for the same smart reason (Sam/JC are just too weak to get rid of now), the second HoH tomorrow night suddenly becomes insanely important for the remainder of the game.

I’m going to have a live feed thread in a bit and will mention it there but I want to tell everyone in NC/SC area to be careful and we’re all going to be thinking of you over the next few days. I’m not extremely concerned because I know how tough you guys are and how you’ll all pull together to help each other, but just make sure to stay safe through the storm!