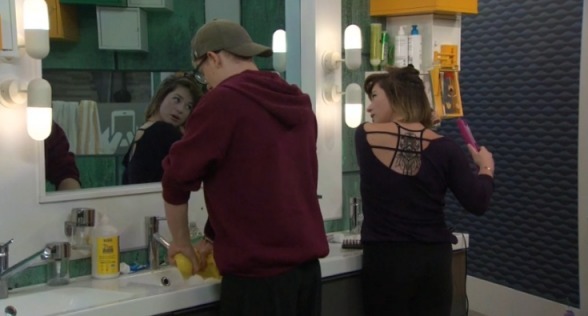 It’s Friday in the Big Brother house so we’re expecting nominations today and thanks to the dumb Battle Back competition, no drama expected!

I realized last night that I hate the Battle Back comp. Maybe it’s just this year because I feel those remaining have really fought for their position and to just throw someone back in is dumb, or maybe it’s because I forgot just how annoying Scottie is and was glad when I didn’t have to listen to him call Kaycee ‘daddy’ anymore. Either way, I’m not a fan and after 2 weeks of boring feeds, this gave the new HoH (Tyler) an easy nominee (Scottie) in addition to the expected one (Haleigh). For any chance at good feeds this week, we need to hope for Haleigh to win PoV, but even then it will result in Sam going on the block and Scottie leaving.

Another thing I want to talk about is something I talk about multiple times every season – conspiracy theories. Every week it seems there are new people complaining about production ‘rigging’ the game for someone else. I joked that production was favoring Fessy last week because they had a comp tailer made for him come up when he was going home, but that was to poke fun at the Tyler thing and how it would be weird to rig the game for both sides of the house. Well, during the HoH competition, calls of theories erupted again as Haleigh came closer to a win.  During the comp, she rarely had any sauce sprayed in her face and the pie didn’t hit her much. This could easily be explained by the difficulty of aiming that mustard/ketchup stuff combined with her not squatting until the end, but some ran with it that production wanted her to win, now.

I’m sure that was only amplified when Tyler’s mic leaked telling the DR that he planned to nominate Haleigh and Scottie, but I was sleeping during that so I missed any uproar. That incident, btw, sounded like a leak to the feedsters and not to the house.

As I mentioned, it’s likely that Haleigh and Scottie will be on the block today. It’s unfortunate because I really love the thing Haleigh and Tyler have going on between them. It’s a friendly rivalry with tons of mutual respect by two fierce competitors. The fact that the HoH comp came down to them was a fitting end to what may be Haleigh’s final week in the house and for that, I thank her for giving us what she did all summer. She was the brightest bulb in a room full of dying bulbs (her alliance) and gave every competition her all. I’ll talk more about her as the week winds down if it appears she is indeed leaving, however.

Here is what I expect for the final schedule:

That’s obviously not set in stone and it’s only my prediction but despite what the house thinks, the numbers still line up fine

Stepping away for a bit. I’ll create a new thread when I come home tonight. Noms should be Scottie and Haleigh so there isn’t much of a surprise there. I also don’t expect any drama from it