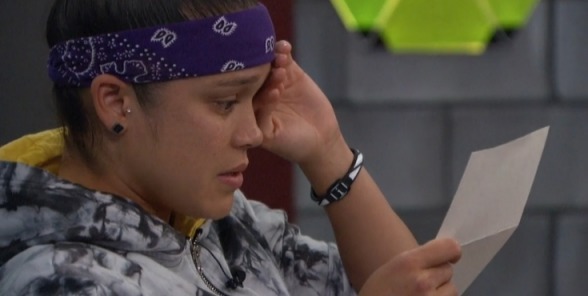 It’s nomination day in the Big Brother house and we are expecting a huge surprise sometime this afternoon. Kaycee is going to shake up the house and nominate Angela and Tyler!

Haleigh and Sam will almost certainly be the noms and Haleigh will go to jury on Thursday if she doesn’t win PoV. The biggest mystery right now is why the feeds are currently (as of 9:45 am) on feed reruns which usually only happen when they’re filming something. This could be for a number of reasons, but I’m going to go with the most obvious that it’s nothing.

On another note, people are still buzzing from Scottie’s eviction speech but can I point out one random thing from that? Am I the only one who thinks he looked absolutely ridiculous sitting on the back of the couch? He looked like the substitute teacher who tries to be cool and connect with the kids so he flips his chair around and gives them ‘real talk’. I like Scottie, but that weird act has got to go. It was hilarious how he almost fell on his face on his way out the door, though.

Regarding his actual speech, there is not much to say about it. It was shitty to do. His fanboys are trying to justify it by bringing up random things Angela said or did around the house (like playing a prank and hiding a condom wrapper under the bed of the couple that was openly hooking up) but you know the saying, two wrongs don’t make a right. People are acting like Angela went to cast her vote and said: “I am voting Scottie out so he stops spanking it in the bathroom”. That would be publicly humiliating him on national TV which is basically what he did to Angela and Tyler (especially considering what he said was false – what I said was false as well, don’t sue me)