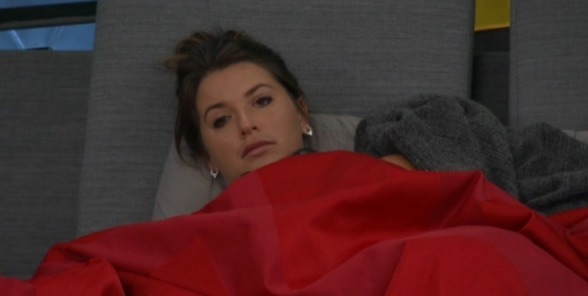 We’ve officially hit the part of the season where the house is on cruise control until the finale night when someone has to pick the person sitting next to them in the final 2 and we get to see if the jury is bitter or not. Up until that point, we’re almost certainly going to see Sam and JC get picked off over the next 6 days as there are two evictions this coming week.

Yes, it is boring, but most seasons are at this point.  The meat and potatoes of drama during every season typically happens early in the season and could last up until there are 5-7 people left in the house. More people in the house = more chances for drama, it’s that simple. By the final 5, everyone knows what they’re going to do and it’s all about winning comps to get it done. L6 is going to ride our their alliance until the final 3 and then we have until finale night to see who the final 2 is.

I may as well take this time to give credit where it’s due and to say that the remaining L6 players have done a tremendous job all season. They were mostly boring to watch but they got the job done and it was a really great team effort. When they were in trouble, they worked as a group and got out of the trouble. Kaycee saved the alliance by winning the hacker comp, and Tyler saved it when Haleigh won her hacker comp and nearly sniped him off.  They were complete dogshit when it came to winning HoH comps early in the season, and lost two people as a result (Rachel, Winston), but managed to pull through with only 2 losses despite this HoH run by non level 6 members

Evicted during those 6 weeks were (in order) – Swaggy, Winston, Kaitlyn, Rachel, Rockstar, Scottie

That is pretty impressive no matter how you spin it. Level 6 was so outnumbered early on but the house couldn’t capitalize on it because they did a great job at hiding their actual alliance.  That’s why it’s hilarious to see Swaggy tweet things how he would have run the house if Kaitlyn didn’t screw him but the reality is that nobody in his alliance was very good. That’s why they blew all those chances to get strong players out early. If Kaitlyn didn’t betray him in week 2, the house probably would have talked Sam into getting him out during her eviction.  He made the classic mistake of going in and overplaying the game way too early which is nearly impossible for anyone to survive.

I am going to be in and out today so I’ll update when I can. I think the feeds may be down a bit over the weekend as we have noms, veto, and Bebe Rexha coming in to play a few songs.