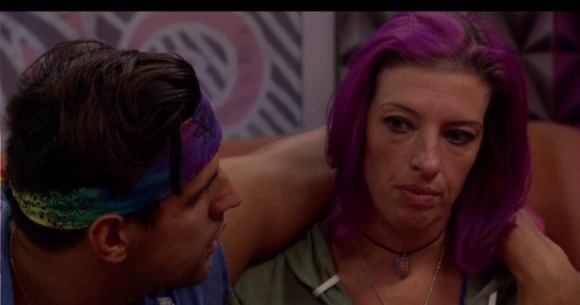 Good morning! This is a long recap so you’ve been warned. You already know Kaycee won the hacker comp which is rumored to have something to do with identifying things in rooms in the house. We’ll have to wait for the veto to discuss any outcomes and strategy because right now, almost anyone could go home. Steve mentioned last night, the comp is supposed to be OTEV.

Haleigh was convinced Kaycee won almost immediately. She said she could hear Kaycee jumping and making noises. (Tyler told KC he heard her too) She must have been near them during the comp and heard her celebrate or something. Hay also considered Scottie, Brett and JC as possible winners. At one point, she even doubted Rockstar. This came shortly after Haleigh, Fessy, Rockstar and Scottie solidified a 4 person group saying they trusted each other. Is it any wonder they’re a mess? They can’t trust each other for 2 hours. They may be one of the best worst alliances of all time. I root for them to succeed one day and the next, I root for them to fail just to see if it can keep happening. Don’t get me wrong, L6 has made their share of missteps in the game but nothing compares to Foutte/Hive. They are completely dysfunctional and I love them for it because they’ve given us great entertainment.

I’m not sure what I’d like to see happen this week. I was happy that the first 3 twists/powers failed and didn’t change the course of the game. Kaitlyn didn’t come back, Angela won veto and took Tyler off the block to undo Haleigh’s hacker win and Bay left with her power unused.  I don’t know if Haleigh was serious because she was mad when she said it but she talked about taking RS down and putting KC back up if possible. She’s mad the hacker power was used. (She really thought KC wouldn’t use it because Hay told her she was safe-wth?) If she was really going to do this, I wouldn’t be mad if Haleigh was able to undo KC’s hacker win. She could stick KC back on the block and Tyler might use his power app unnecessarily. It would be wasted if he wasn’t the target. If this happens, it would be the first time none of the twists changed the game at all and I’d like to see it happen. I like Tyler, KC and Angela and she did a good job last week as hoh  (not with jury management) but if one of them has to go then so be it. Haleigh won the hoh and L6 didn’t so if they have to lose someone…oh well. That’s what the BB purist in me wants to happen.

Having said all that, part of me wants KC to get picked to play and win, take Angela down and Tyler use his app. I’d be lying if I didn’t admit that I’d crack up watching Fessy walk around asking “what happened?” and RS would start yelling about white privileged rich kids. I think Haleigh may put JC or Sam up before Brett so all four L6 people could potentially be safe. I’d really love it if Sam went up and got evicted so they could “mercy kill her” as Sam says. It’s a great season when I know I’ll be entertained with either side winning!

Haleigh told RS and Scottie that she’d like to put KC back up and tell her she would’ve been safe but not anymore since she pissed her off by using the hacker twist. She also told them she was thinking about “pulling a Dan” and sitting everyone at the table. She said she’d make them all give a name of who they thought the hacker was. The persons name who was said the most would go on the block. If someone refused to give a name, they’d go on the block. There may be something to the jokes about stuff being pumped into the hoh room this year. She isn’t near Bay or Kaitlyn level yet but the hohitis is already visible. She was furious when the hacker used the power. She thinks if Tyler wins veto, he’ll do what she wants with it and she thinks if Brett wins, he’ll take RS off the block. I like Haleigh but what was the hell is she smoking? She spilled too much info yesterday about too many people without realizing she was doing it. Here’s more of what happened yesterday:

Everything with Sam makes more sense now that we can put it all together. She really didn’t even know what the game was so when people are strategizing, she thinks it’s people taking the “game” too far and not letting go of it once it over. (comps) It’s why she thinks the game is making everyone crazy. She thinks the planning and plotting is personal and unnecessary behavior. As far as the guys are concerned, she’s told Tyler he was like her brother so she’s protective over him. (Her brother was hurt in a relationship she once said so Kaitlyn was an issue, now Angela is) She thought Scottie had a crush on her weeks ago but thought she let him down easy.  (Its why Hay’s a problem for her) Sam told RS she thinks Fessy may be gay so Brett is the winner. We were right about this coming from jealousy, we just had the wrong guy. Regardless of the source, she’s lost it in there. BB needs to “mercy kill” her if Hay doesn’t because she needs to go.

Steve will be back with veto results later. Have a great Saturday!