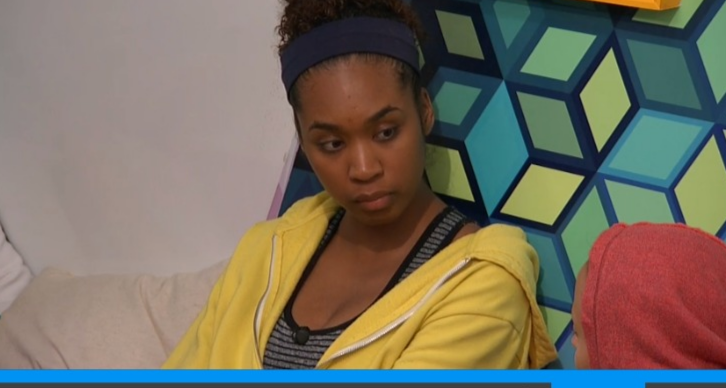 Good morning everybody! It was a slow night in the BB house last night. We had more of the same that carried over from the daytime talks. Bayleigh still has a bad case of hohitis, Rachel is still nervous and Sam may be looking to change careers. She could give up welding and become an exterminator when this is over or a trapper at the very least. She may be the first hg that spends more time on Pinterest instead of Ebay post show. She was trapping ants to feed to the spiders she’s collected but I’m not sure what the cotton balls, chopsticks and jars in the closets were used for but I’m not a trapper so I don’t have the inside scoop.

Just when we thought Sam wasn’t going to be outdone showing us how to run an hoh, Bayleigh said “watch this!” Along with telling Rachel about her power app, (which works best if it’s anonymous) she’s given away other information too.  She and Kaycee share info but the difference is, Kaycee uses it to help her alliance and Bayleigh just talks a lot. Let’s go over what Bayleigh accomplished in one day.

When Bayleigh is evicted, we can officially say that July 27th is the day she lost BB. Technically, she could still win but she had (by far) the best power app and she gave away most of the advantage. The week she uses it and changes the noms, she better hope she wins the veto. If she doesn’t, that week’s HOH can put her up as a replacement nom.

Bayleigh and Kaycee compared notes and have been talking game since the week Swaggy left. Kaycee tries to steer her towards Scottie as a renom. It wasn’t working and Bayleigh admitted that she didn’t care about Scottie, she just cared about Kaycee’s side having more votes. Bayleigh is right but shouldn’t say it, even to Kaycee. Bayleigh keeps having sushi dates with Kaycee and she’s seriously overestimating the pull she has with her. (Bayleigh made the comment that she’s sure Kaycee would have hit on her if Swaggy hadn’t been there)

Fessy told Hayleigh that using the veto was bad for his game but was good for hers. (They argued earlier in the day and didn’t speak much) He’s determined to make her show affection towards him and isn’t above using guilt. He needs to remember that Hayleigh was going to pick Scottie to play in the veto but Fessy hounded her for an hour asking her to pick him. He told her they weren’t going to “get gigs after this” the way things were with them. Fessy and his 1 inch ponytail needs to sit down and shut up in my opinion.

Fessy tried to get JC to thank him for keeping him off the block and JC wasn’t having it. JC felt he kept himself off the block by talking to Bayleigh. Fessy wants JC to be grateful and he told JC to stop saying that he doesn’t know what he’s doing. JC caved a bit and told him he knew maybe 40% and not to get crazy. Lol

Rachel continued to try and figure out where the power apps are once she realized it could be a factor while sitting on the block. I don’t know why that didn’t occur to her when she told Bayleigh she was ok with being a pawn. She asked the DR if people could lie about it. (JC told her a while back he had one. He’s also told her several times he was kidding) She started asking him again so I’m assuming she was reminded by the DR that people lie in this game. She’s very pushy with her agenda. She wants Scottie otb and pushed as hard with Bayleigh as she did for Kaitlyn to stay last week.  Rachel’s been borderline obsessed with getting Scottie out for some time. It’s fine to influence the hoh if you have the influence but she doesn’t. Rachel wants Kaycee to play in the veto and use it on her. Kaycee said she’d talk to Bayleigh about it. Bayleigh wants the noms left the same and Kaycee knows this but I’m not sure if she’s passed it on to Rachel yet.

Kaitlyn made the interview rounds the day after her eviction. She’s finally realized Tyler played her. She’s saying she was planning to go after Tyler & Fessy if she had stayed in the game. (Who actually believes this?) She also thinks JC voted for her because he wanted her to stay. She’s the gift that just keeps on giving! I’m probably done with Kaitlyn updates unless she’s on social media saying crazy stuff. She has some real life problems ahead of her and I’ll give the basic facts if they come my way but that’s about it. I don’t enjoy following someone’s downfall in their personal life with any detail. I am curious if she and Swaggy make up or have a Twitter war and I’ll keep you posted if and when it happens.