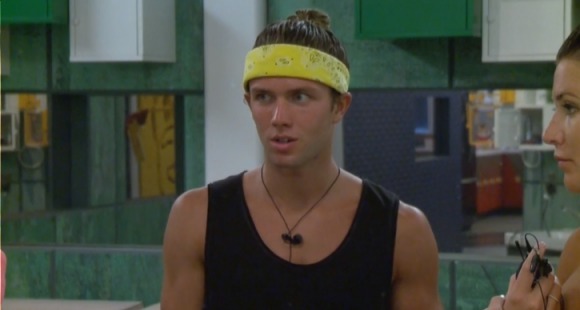 Good morning! I finally slept last night. Yos!!  (I’m aware most people would type “Yas” but Rockstar’s given “yes” a bit of a twist so I’m going with it) I was worried I’d have alot to catch up on before I did the recap since I HAD to get some sleep but the hg’s bed time came kind of early. I think the Hacker exhausted their brains yesterday. Steve also covered all the important things that happened so I’ll do a hg “where there heads are at” update and try to clear up some things that have been confusing. These are the 2 power apps still in play:

The Cloud:  If you’re confused about when they can be used, I’ll clear that up first.  The descriptions are vague so we’re basing what we know from the hg’s talking about them and what we read on the card. Tyler can prevent the hoh from nominating him if he uses it before noms or before a veto ceremony when a replacement nom could be made. If Tyler was going to use it yesterday, he would have needed to use it before Angela made her noms. He has nothing to use against the Hacker twist since the ‘switch’ comes after noms have been made. His app description doesn’t say this but his app is only really useful to prevent himself from being backdoored. He’ll have to save himself the old fashioned way this week.

Identity Theft: Bayleigh can change the initial noms before they are made. Her app is only useful when someone gets hoh and she has a reason to think she won’t like the noms. She will pick 2 new ones before the keys are turned. Unlike Tylers, Bayleighs app can’t be used for the veto ceremony on a replacement nom.

Hacker Twist: This twist lasts for 2 weeks. We don’t have official confirmation but we’re sure Haleigh won it this week. Next week, they’ll do another comp but we don’t know yet if the winner will get the same power or something different. I’m guessing different because I think the Hacker powers are actually the 2 apps that didn’t get picked. One of them was called Upgrade and I don’t remember the other one. (fill me in if anyone knows) This week’s winner gets to replace 1 nom, (already happened) choose 1 of the veto players and cancel 1 persons vote. We’ll probably hear the order of picks later today once they talk about it.  I heard them talking about it yesterday but its too detailed to get into if it isn’t correct so let’s just wait on that one.

Conspiracy theories were going around yesterday because the image for Tyler’s cloud app briefly came on the screen. People were saying it was production sending Tyler a msg to use it. I don’t think the image was their version of a bat signal. I also think it popped up before there was a Hacker winner. I’ve talked alot about production involvement and wrote a long editorial on it last year but I think this was just somebody hitting the wrong key on a keyboard. (If you’re ever bedridden or have a really long flight and want to read it, it’s called “You’re not allowed to talk about production.” It’s VERY long because I covered all seasons of productions involvement that I was aware of, diary room leaks and some behind the scenes stuff)

Last Night, the Hacker & the HG’s:

Level 6 is convinced Bayleigh is the Hacker. There aren’t many people who would want Tyler otb AND also want to make sure Scottie is off of it. They probably dont see how close Haleigh and Scottie are either. They noticed Haleigh was acting wierd but think it’s because she knows and is covering for Bayleigh. Kaycee also said Bayleigh was acting the same way she sid when she got the power app. Why don’t they think Bay would put Brett up again?  The plan is to backdoor Bayleigh this week if they can get Tyler off the block. I’m honestly not sure what Hives plan is because I’m not sure who’s being lied to yet. What Hive will do will vary more than it will Level 6 depending who’s on the block. There isn’t any point in going over scenarios of how people will vote when we dont know the final noms so we’ll save that for later. Here’s what’s going on with them as of last night:

We’ll have more to discuss once the veto comp happens. I’m excited for this week because even though we  say L6 can’t keep getting away with hiding votes, they keep doing it. This really could be the week people have to choose and things are out in the open. Depending on who the final noms are, Haleigh may have to choose between Rockstar and Scottie. Scottie and Fessy could have to choose between the guys working together and the Hive. JC may even have to pick between being loyal to Tyler or JC. It should be fun!

Once again, I’ll have to save my random info for later because my post is long. If I don’t get it in soon, I’ll need to toss it because it won’t even be relevant anymore.

Thanks for all the ‘get feeling better’ comments from yesterday and if Steve ends up having to be gone this weekend, I’ll post an update later today. Have a great Saturday!

Twitter Vegas said it will be a ball balancing comp. It could be the one they have to make go back and forth on something without letting it hit the ground. ?? Steve will take care of us later today so I’ll catch up with you guys in the morning…unless something exciting happens…I’ll have to forget the bookkeeping and join the comments!!