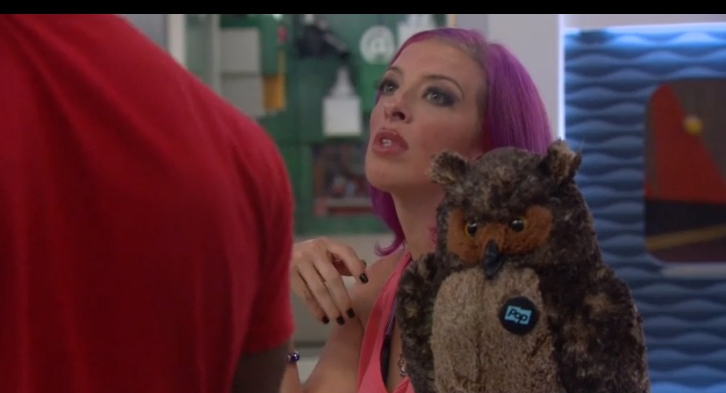 We missed a lot because of the power app, nominations and people laying under blankets and moving their microphones so we couldn’t hear things. There was game talk and some subtle work in play with a few people.

Tyler is still trying to keep tabs on Kaitlyn but that’s becoming harder since Fessy has been all over her. Fessy has distanced himself from Haleigh to the point that she asked him if something was wrong. Haleigh and Fessy may be in the same alliance but I’m assuming she wasn’t included in the strategy for Fessy to feign sexual interest in a crazy woman to help ensure the alliance stays together. Fessy and Kaitlyn laid under blankets and whispered for a while. I thought I picked up on some of what they said but because I’m not sure, I won’t write it here. I’ll just say that from what I did hear, let’s hope she has a very understanding boyfriend. I heard them discussing what to do with the microphones so people couldn’t hear and saying in order to get away with something and that they’d have to move a camera. Eventually, Kaitlyn spoke to Tyler and told him Fessy was telling her about his feelings for her.  Tyler pointed out that it might put him in an awkward position and Kaitlyn assured him it wouldn’t. I don’t know if Fessy actually told her that he’s falling for her or if she heard it when the universe was speaking to her. For the record, I don’t believe Tyler is interested in her at all but she is important to his game. Yes, he’s all over her lately but she knows a lot of information on him and he also knows she’s a loose cannon. He’s aware that she’s an emotional player and that she’s desperate for attention so he’s playing into that. I don’t think he planned on Fessy being smart enough to realize he should do the same. I don’t think this week is a done deal by any means because Kaitlyn is such an emotional player and I think almost anyone can find themselves in trouble. Remember, Tyler actually liked Haleigh but realized it wasn’t going anywhere (because of Fessy) so he let it go. One small thing to point out is that Kaitlyn has known ll along Haleigh liked Tyler more than Fessy and could have shared that with Tyler but didn’t. Kaitlyn wants all the boys and can have them now since she’s HOH. It doesn’t matter anymore because Hayleigh is on to Tyler and wants him gone soon. (I’m glad that part’s over because I feel like I’m a teenager discussing Junior High crushes)

Haleigh put in a little work of her own because Bayleigh and Swaggy warned her that Scottie was a little distrustful of her and thought she should spend more time with him. She worked on that some last night. At one point, I believe he gave her a massage so maybe it went well.

As expected, Kaitlyn couldn’t keep her mouth shut about anything. It’s made it through the grapevine that Kaitlyn is still upset with Swaggy (even tho they made up) over him calling her shady last week. He’s upset that he’s taking the brunt of it when they all called her shady and he’s right.  He doesn’t realize it’s because Tyler wants him taking the brunt of it all.  Bayleigh is worried that Kaitlyn is lumping Swaggy & Bayleigh together and we had to hear the usual statements of “I’m my own person” and “I have my own opinions” like we always do when someone gets in a showmance. I’m sure she does but this is what happens when you pair up…you get seen as one opinion so suck it up buttercup. Swaggy & Fessy have seemed to reverse places on the Tyler train. Fessy keeps including Tyler in their numbers now but Swaggy said if he gets the next hoh, he thinks Kaitlyn and Tyler may have to go on the block.. Swaggy still doesn’t know Kaitlyn may be targeting him this week and his focus is to make sure Scottie doesn’t get evicted over Winston. (No way this stays a secret, Kaitlyn got too many bath oils in her hoh basket for friendly tub parties and secret sharing)

Scottie has also stopped giving Tyler information. He shared a little about who they should choose for the veto comp but held back most of what he and Swaggy talked about.

Rachel is still a little shaken over the crap app. She isn’t worried about the punishment but she’s very worried about America not liking her. Brett told her to stop talking to the camera and how America didn’t like it. She said she was told they did like it. Brett and Sam said they were told not to pander to the camera. They’re all actually correct and getting it jumbled together. We don’t want you to beg us for crap but we like to hear what’s going on in you head with the game. Rachel was already very behind the scenes but after the lecture from Grodner, the crap app and the advice from Brett & Sam, we may never hear from Rachel again. She’s just going to start over-thinking everything and be afraid to say anything. Rachel’s personality seems to fit in more with the other side of the house in my opinion and if the house hadn’t divided the way it did the first week, I think we’d be seeing a different Rachel. The other side likes her and she hangs with JC a lot so she has the potential to be in the same kind of position Haleigh is in but at this point, she may be in her own head too much. This isn’t a Rachel pity party and I was offended by the things she said. I’m just looking at how I think it will relate to the game she’s going to play. Except for the comments that she and Angela made, she hasn’t been relevant on the show so I’m not surprised she got the crap app. I thought it would be between Rachel Angela and Scottie.

Winston went back and forth between saying he’s fine and confident to having mini meltdowns. Maybe I have a warped sense of humor but I find it funny to watch. His eyes bug out a little, he mentions how many people he’ll throw under the bus and he’s still concerned about Sam. In his defense, Sam told Brett something about her having a lot to think about after noms and Brett reminded her that Winston voted for her to stay, not Scottie. Winston is still saying that Sam doesn’t know the game and is a liability. He’s right but the same can be said about Winston imo. He seems like someone to me who knows just enough about the game to screw everything up and I think people who know nothing are almost in a better position. It reminds me of people who play paint by numbers BB. They’ve seen enough to know that they’re supposed to have strategy meetings so they have them, they’re supposed to make an alliance and name it so they go through the motions of doing that, etc. They do these things without a full understanding of WHY they’re doing them. One concern Winston has that is legit is that Sam is a loud talker. (I’d never make it on BB. Along with being the token late 40’s mom/grandma, I’m also a loud talker)  Kaitlyn said Swaggy heard Sam talking about her power that he isn’t supposed to know about. I don’t know if this is true or not because I didn’t catch Swaggy discussing it but Sam’s inability to whisper has been brought up by several people. The Level 6 plan is to keep reminding Sam of which side saved her because they’re worried Sam could fall for the other side being nice to her. They also don’t realize how much she likes Scottie and that’s the biggest hurdle I think they have to get over with Sam if noms stay the same. As Steve mentioned yesterday, Kaycee put in some work with her and Rachel has been too.

This year is a little different with the rewards and punishments. It usually is based on who people like better but this year it’s about exposure. I understand why the hg’s reaction is to assume America doesn’t like them but in reality, it’s more about how noticeable they are and several things factor into it. It’s what they’re doing on the feeds and how much game they’re playing. It’s also how much air time they get on the episodes and how many diary rooms a person has aired. Feed watchers arn’t the majority of voters so I think the espisodes have a bigger impact than anything else. Based on this and the fact that Tyler can keep his mouth shut better than some, I’m more convinced he got the power this week. Depending on who remains in the house, I expect Swaggy, Kaitlyn, JC and possibly Bayleigh to be in the running for the rest. Id even say Angie Rockstar if BB starts airing some of her funny comments but they have JC to fill that role so it probably won’t happen.  If people keep playing the same type of game for the next few weeks (which won’t get them much air time) , I think people in line for punishments could be Scottie, Kaycee and Angela.

I hope ya’ll have a great Saturday! Steve will have more and hopefully better info for you later today. Sorry, I didn’t have a lot to work with last night.