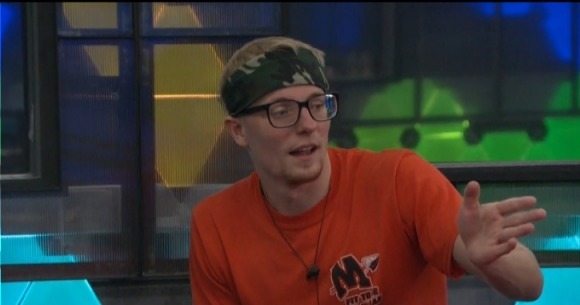 Editor’s note – Veto competition should be a long one today. I have a family event to go to but will post the results when I get home or when the feeds return (whatever happens first). Until then, words of wisdom from Mel….

Good morning! Last night was a slow night and Steve covered just about all the game talk (and some crazy talk) throughout the day. If you missed any of it, you can go back and check his updates from yesterday. The Sam/Brett conversation is really worth checking out because the summary I give won’t do it justice.

We’ve got the veto today and we saw the vegas leak saying it would be the hide and go seek competition. That may be unfortunate for Scottie who does very well in physical comps and has a lot of game knowledge. No one really has an advantage but JC could have a disadvantage if people hide theirs in a really high location. I originally thought Sam might get upset when the house gets destroyed but cleaning may give her something to do. I don’t remember how long the feeds are usually down for this comp but Steve might know. I thought Zingbot usually came and then hosted the veto comp but maybe I’m remembering that one wrong. I don’t see Zingbot hosting hide the veto but who knows?  (maybe I should have looked all this up before doing my recap, huh?) If they are connected, the feeds could be down later in the day depending on the temperature. Zingbot passed out from the heat in season 14 and almost passed out in either season 11 or 12.

This is JC teaching Brett Spanish with words on the front loop box. 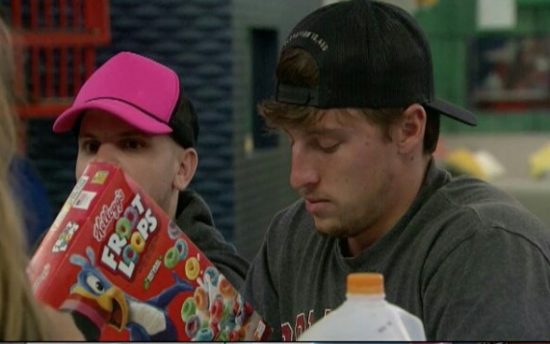 Here are some things from yesterday and most of it’s random since the game stuff was thoroughly covered by Steve already:

Here’s Sam eating Bretts dinner right before her lips swelled up and had to go to the DR. She’d told him earlier they were in love, had a F2 and he was her fake husband. Think he was trying to poison her? 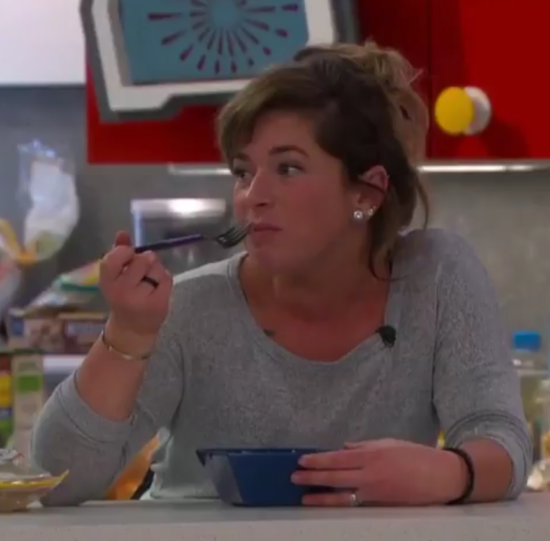 Speaking of Sam, she told Angela she pretends like the cameras are her dog and it’s comforting to her. After hearing the crazy conversation she had with Brett, I realized I’d pay money to have Sam describe the game of Big Brother. I’d like her to tell us what it’s all about and how it’s played.  She’s obsessed with people being coupled up too. Is it all jealousy or does she think part of the game is finding someone to pair with, male or female? She started out thinking the game was only played during the comps and the rest was ‘down time.’ As time’s gone by, she’s learned there’s strategy and trickery but she’s still running in a lane off to the side of what’s really going on. Is that where some of her crazy stuff comes from? I don’t know but some of what she’s saying sort of makes sense if you look at the game through a crazy persons eyes. (or I’ve snapped myself) 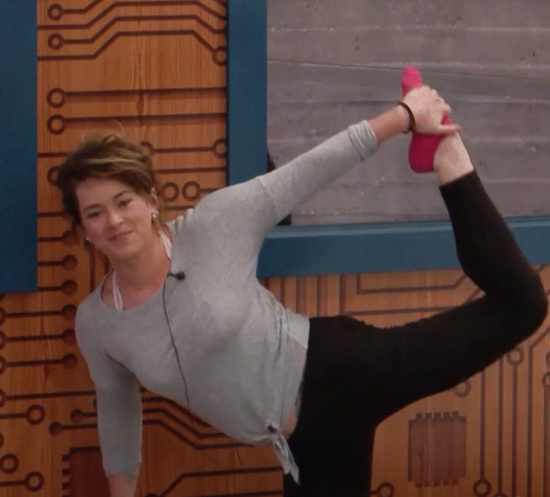 Once you take the nutty love stuff she said to Brett out of it and listen to her game talk, it sounds like someone who thinks the ‘game’ is a group of people who are being almost choreographed every week to fill certain roles and participate in predetermined situations. She waits for it to be “her time to go to the little house.” She told Brett she thought maybe they had a secret F2 but she didn’t know about it, almost  like she hadn’t been filled in yet by the people in charge. She figured out based on what Rockstar was feeding her that Tyler and Angela were targets last week. They didn’t leave so I think that’s why she told Brett she thought they were the targets this week. She hadn’t talked to Fessy or anyone about it but just picked up where things were left after Rockstars eviction. Sam knows the disagreement between Brett and L6 was fake last week because Tyler told her when she was getting upset. He told her everyone was fine and it was for the game, it wasn’t real. Yesterday, she assumed the mild disagreement Fessy and Scottie had after noms was fake and said so to Brett and Scottie. Since the last one was fake, maybe she thinks everything is at this point.  She thinks they’re faking it (Fessy & Scottie) and the real plan is to backdoor Tyler or Angela. (the plan from before) She also told Scottie she though it was fake because she knew about the “5” which was the plan Rockstar was working on and telling Sam about.  (also from the week before) Don’t get me wrong, she IS nuts!  She knows they aren’t actors but she may think they’re paired up or teamed up by people not filling her in yet and then the comps determine how the week plays out from there. Since she doesn’t ever know what the ‘new plan’ is, maybe she goes off of the ‘last plan’ that she does know about. After typing this, I realize I may sound as crazy as Sam and I think I’m explaining it badly too. You know, when you know what you mean but you can’t articulate it very well?  (maybe Sam and I have more in common than I’d like) I can’t analyze her game so I suppose I’ve started analyzing her thought process….which isn’t time spent well, I’m sure.

I absolutely love we haven’t had one repeat hoh this season. I also love this cast, the good, the bad and the crazy. It’s an amazing season and I can’t even keep a favorite source of entertainment from week to week because they all entertain me. I don’t like Haleigh’s showmance or her terrible gameplay but I like other things about her. Fessys’s barely playing but I look forward to watching him blanket and be confused every week. Obviously, I don’t like things JC’s done and said but I love JC.  He gives me the most consistent entertainment on the feeds and I also think he’s played a good game. If I picked favorites, mine would be JC. Is he probably going to go home at the expense of level 6? Yeah probably, but if he figures out the alliance and finds a way around it, I wouldn’t hate a JC win. I thought based on preseason interviews, he’d be the worst player. I’ve loved him since week 1 but thought he’d be terrible at the game. Tyler would be a deserving winner because he’s worked hard since day one and kept many balls in the air. Brett worked hard to be a duchy bro (but a funny one at least) who I didn’t like at all. Not only is he giving us fun stuff, he’s learning the game, similar to the way Paul did in his first season. That’s always fun to watch. Angela is quiet and more bland than most people like but she plays cold hearted (at least so far) and I approve! I’ve fallen in love with BB all over again this year!

JC called past winner, Rachel Reilly before the show started to get some advice. Rachel said recently on a podcast that he’s doing exactly what he told her he’d do. (It’s what he said in his entry interview too)

I’ve mentioned my husband not being a fan of BB before. He doesn’t watch it but will sit down for a few minutes when it’s on sometimes. It’s usually during a comp or an eviction, something with an immediate result. He knows a few people’s names and a bit of what’s going on. He joined me for the end of Thursdays show when the slip & side started. He, like everyone knew before the show ended who was going to win. He looked over at me and said “Feces is going to win.” I died laughing because he wasn’t joking, he just got his name wrong.  I don’t think it’s a good nickname for Fessy and I’m not encouraging anyone start calling him that. I think Messy Fessy fits perfectly but I did think it was funny so thought I’d share.

Veto players are Fessy, Scottie, Brett, Tyler, Angela and Haleigh. (Scottie used hg choice to pick Haleigh) With zingbot being there, it could be a long one.