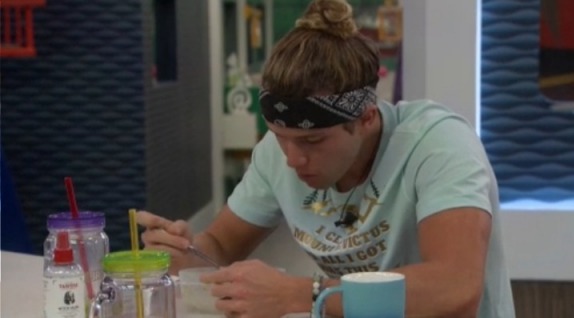 Round 2 is in the books which means we’re about 99% sure of what will happen on Wednesday night regarding the final 2. Who will actually win from those two is going to be a big discussion all week but we know – for now.

Kaycee unsurprisingly won the second round of the HoH competition which means JC has zero control of his fate at this point. Kaycee and Tyler will face off in almost certainly the scales competition where they’re pretty even in that style. I’d probably put it at as close to a 50/50 result at there can be, although I’d give Tyler the slight edge, so maybe 60/40 Tyler.

Regardless of who actually wins the comp, as of right now the chances of them taking each other are very, very good. If it happened tonight, Tyler and Kaycee would be the final 2 guaranteed. However, there is still a few days of thinking that they need to do and that extra 0 added to the end of the prize money is a big difference from second to first. I discussed who I thought would win in each situation, and you can read my reasons why here, but right now Tyler is my favorite to win the season. He’ll have an easier time winning if he takes JC to the end, but I still do think he can beat Kaycee.

If the house doesn’t respect Tyler’s influence in the early season that completely set the tone and changed the course of the season when his alliance needed it most, they’ll be known as more bitter than some of the more recent seasons.

Now, I say all this not to kiss Tyler’s ass or because I’m a fan. I’m not really a fan of anyone. I actually try to be neutral as best I can and bash everyone the same if they do stupid moves or credit them when they do good moves. I’m more than happy to see JC, KC, or Tyler win this season because they’ve all played well enough to deserve a win. 3 completely different style games from the bloody hands of Tyler to veto queen Kaycee to JC’s manipulation and spying.

My point to bring up Tyler’s game is because he has the resume to win if he words it right and this is something Kaycee may want to be aware of if she is planning on remaining loyal.  If she wins the final round of the HoH competition and takes Tyler, that could be a Codylike $450,000 decision. Of course, she very well may win over Tyler, but her odds are much, much greater if she’s sitting next to JC because her social game was just so much stronger than anything JC really brought to the season.

Needless to say, Kaycee is in a tough spot because it really is difficult to throw an entire season of loyalty down the tubes on the final night of the season. As mentioned above, Cody was in the same situation as he won 3 veto comps late in the season to go along with his 3 hoh wins. He will forever be known as the guy who gave up nearly half a million dollars but he’s still overall liked by the fans and could probably do another CBS show if he wanted.

Kaycee has two options if she wins. Look like a scumbag and easily win half a mill or go down swinging and hope to convince the jury her social game was more effective than Tyler’s overall season.

Personally, I’ve vote for Tyler to win if sitting in the jury and I don’t think I’m alone.