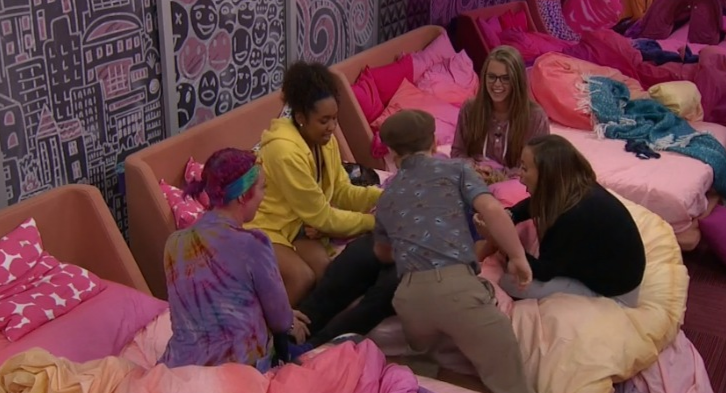 Big Brother is under fire once again for something that is virtually unpreventable in the environment they have.  US Weekly picked up the story of JC’s sexual aggressiveness and the conversation between Angela and Rachel that sparked some outrage.

Here are some quotes from the article:

The latest incident on the live feed occurred Monday, July 2, when it showed houseguests Rachel Swindler and Angela Rummans discussing their skin tones.

“My stomach is as dark as Bay,” Swindler, 29, said, referencing black contestant Bayleigh Dayton. “I can’t be in the sun for two days straight. … I will change ethnicities. I already have.”

To that, 26-year-old Rummans replied: “I’m looking ghetto here with the skin coloration.”

And then they talked about the situation TMZ picked up on which was JC:

JC Mounduix has also been criticized by fans this season after the live feed showed him appearing to sexually harass his fellow housemates. The 28-year-old walked around the house with an ice cream scooper and told contestant Kaycee Clark to “open up your vagina,” tried to place the kitchen gadget under the blanket of Kaitlyn Herman, and appeared to rub his hand over another female contestant’s vagina as she was getting a massage from her friends

Note – The “female” contestant’s “vagina” that JC rubbed was Tyler’s penis lol.  Good to see the reporting is so thorough that they didn’t even get the gender correct.

Now, I’m not going to defend any specific actions or words. What I am going to defend is that things like this are bound to happen when you toss 16 people from around the country in a house for 3 months and have cameras recording every single word they say. People will blame poor casting, but this is unavoidable unless you want to sit around watching a bunch of people staring at the sky all summer not talking. Big Brother can certainly cast boring people (like myself) and be safe, but nobody is going to ever watch it. They need to cast outrageous personalities and with those personalities sometimes come people who say or do dumb things (like Jessica poking people in the butt).

That’s just the nature of the beast.

Does that excuse anyone from saying something racist or sexist? No. Saying that you look ‘ghetto’ regarding a tan is just flat out stupid no matter what. I can certainly understand people being offended by those comments. The thing I do hate is to see the show look bad because of it. If you watch the live feeds, you’re going to hear things you may not like. You’re going to see things you may not like. That would be the same for any reality TV show if they had cameras running 24/7.  In summary – in this case, hate the player and not the game.

Allison Grodner (the producer) apparently came over the speaker yesterday or called offenders into the DR to let them know that they’re not tolerating it at all this season. I’m not sure exactly what that means, but it did have Rachel and Angela spending a better part of the evening clearly upset about it all. JC appeared to be unphased by it, but JC doesn’t appear to be bothered by much. Will they get penalty noms or votes or anything because of it? Who knows. How do you police that? When Rachel said her skin was as dark as Bay’s, that wasn’t racist as much as it was an observation. However, when Angela called herself ghetto, that was racist. Who gets a punishment from that conversation?

Personally, I think Big Brother should keep out of it and let the court of public opinion do its thing. Hopefully, they don’t start punishing people for things they deem offensive because that could be the beginning of the end for the show. Let the public deal with these people and just accept that situations like this are bound to have controversy.

What are your thoughts on the topic?