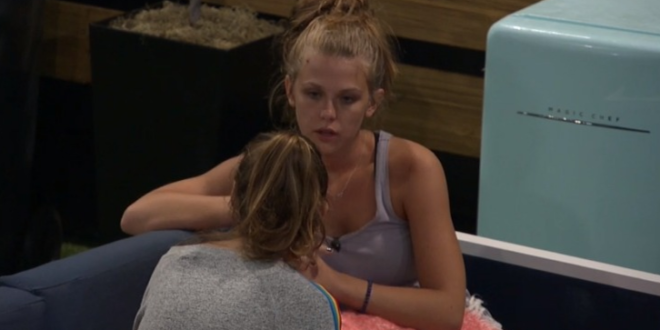 We had our first near fight of the season last night when Kaitlyn’s jealousy over the relationship between Haleigh and Faysal started to boil over when she walked in and saw the pair under the sheets in bed.

This situation caused a lot of back and forth between Faysal/Haleigh and Faysal/Kaitlyn as he tried to reassure both of them that they’re his #1. Needless to say, Faysal is terrible at this game and possibly even worse at juggling women. Haleigh and Kaitlyn eventually chatted around 1:45 am to clear the air on the situation and both basically denied their part in the potential drama. Haleigh was wondering why Kaitlyn said that she and Faysal were having sex under the sheets and Kaitlyn dismissed that as a joke.  Sure.

The two eventually hugged it out, but by no means do I think this is over. Kaitlyn just seems to lose it when she’s talking with Faysal, so I have no doubt she’ll fall victim to his words once again and re-start her crush. Meanwhile, Haleigh is a major flirt so she won’t stop flirting with Faysal, but she claims to like Tyler more while Tyler likes Kaitlyn.  I’m kidding about Tyler liking Kaitlyn, but wouldn’t that be a fun love triangle?  Or would it be a square at that point?

The one bad part of the opening week is that it can feel like an eternity if there is little drama, so this week has been more slow than normal. However, all the ingredients are there for some fun blowups later in the season, so be sure to sign up to the live feeds now so when I tell you to turn on the feeds, you won’t have to deal with the sign up process!

I’ll be off and on today but doing updates between.